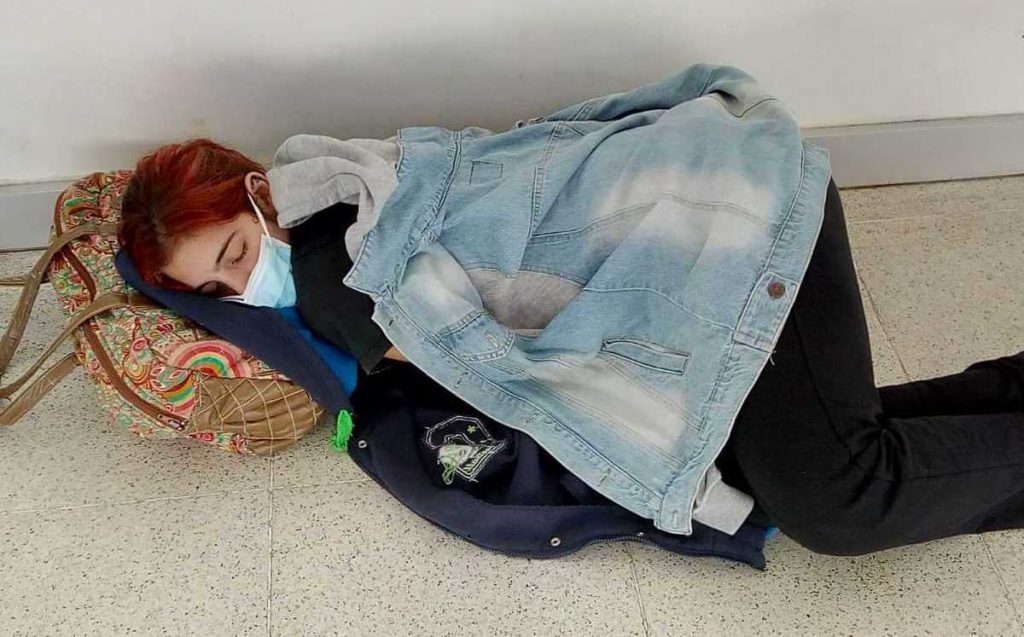 Lara Arreguiz’s photo, A young 22-year-old veterinary student from Santa Fe (Argentina) who was suffering from diabetes died on Friday of Covid-19 disease while waiting, lying on the outskirts of a hospital, due to the collapse of the hospital in the country due to a new wave of the pandemic That left record numbers of deaths and injuries in that country.

Her mother, Claudia Sanchez, posted a picture of her daughter lying on the hospital grounds while awaiting treatment. The photo spread like a picture of a hospital collapse in the country, mainly due to the shortage of intensive care beds.

“We went and Lara was already very sick, she was drowning. She insisted on accepting three times to let us in because he was fainting. They left us in a corridor, where sick or not infected patients passed by the virus,” Her mother confirmed in a statement published in the Clarin newspaper. “(Lara) told me that he wanted to lie down and asked the security if I could lie on a stretcher in the hall, but he said no. He said,“ I will lie on the floor. ”Then a woman saw us who lent us her jacket to cover it because of the cold.”

The young woman had already developed symptoms of COVID-19 since May 13, which deteriorated within hours. On May 17, the day she was tested for the Coronavirus, they prescribed antibiotics for her, however, her symptoms did not improve and they decided to transfer her to a hospital in the area.

Claudia stated that she had been waiting for hours in the hallways. “I understand the health breakdown, but it hurts to see her lying on the ground without breathing and no one does anything.”

Before being sent to the hospital, she was able to make last contact with her daughter, who lived alone and was studying veterinary medicine at a local university. His father, who was already diagnosed with COVID-19, was aware of his health. On May 19, she was under review if transferred to an average bed, where she was receiving insulin.

Despite controlling her glucose levels, respiratory complications emerged as her lungs were severely affected by the virus. She was transferred to the intensive care unit. Lara died on May 21 after suffering three heart attacks.

Lara moved into her father’s house during the southern spring and summer (between October and February). She was on the waiting list to receive the vaccination because she has diabetes and was in the risk group

Her mother requested that her daughter’s story “be useful so that she has more interest with the next Larita,” due to her common illness.

See also  A young indigenous Brazilian man carried his father on his back for six hours to receive a vaccination against Covid-19, and the picture goes viral.