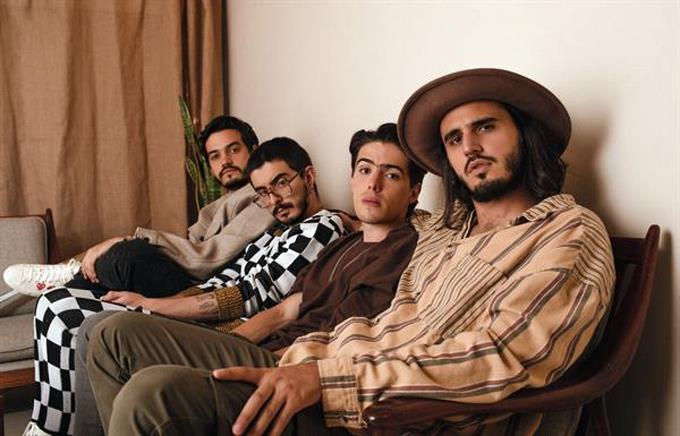 For the Colombian quartet Murat, composing the song “Idiota” and recording their video with Danna Paola was a “special” experience in which they were able to tap into the profession and talent of the Mexican actress and singer to “do something different.” . “

“The fact that Dana was an actress opened a huge door for us to get into the video fully and take advantage of that to do something different. I think it’s ultimately something our fans have been asking for so long,” says Evie Martin Vargas, the band’s drummer.

In this sense, the song “Idiot,” which was released on June 3 and garnered over 10 million views on YouTube, was a “special” experience because it was the first time the four band members “consciously” decided to act in a video. .

“Acting is something you learn (…) we don’t have lessons nor exercises. So I guess it was like touching the water with your toe with the intention of eventually doing it a little more, and also preparing more if you do it,” says Simon Vargas, Martin’s brother A Murat member.

The artist asserts that another idea in the video was that “Dana Paula also shines for her acting skills,” as they don’t always have the chance to have such a talented person as the Mexican in their audiovisual productions.

The song was composed by Murat, Mauricio Rengivo and Andrés Torres, as well as Dana Paula who added her role when she accepted the proposal of Juan Pablo Isaza, the lead singer of the group, to participate in this collaboration.

In addition to this work, throughout his career, Murat has done a series of collaborations with artists such as Juanes, Alvaro Soler, Patti Canto, Antonio Carmona, Sebastian Yatra and Alejandro Fernandez, among others.

Martin admits that this is a very interesting “musical exercise” because, being “four guys playing instruments”, they have the possibility to adapt themselves to different rhythms and sounds, allowing them to reach an audience not too close to pop music. play.

“In addition to the artistic and musical part, I think there is a clear example that the urban genre has taught us is that collaboration is brutal and people enjoy it a lot working as a team and adding more people, bringing audiences together,” he candid.

Likewise, this opened the possibility to “fulfill their young dreams” by singing with artists they admired in their childhood, which is why “collaborations with many artists will continue.”

On July 30, with a concert in Valencia (Spain), the Colombian band will return to the stage on the “Where Are We Going? Tour 2021” tour, which will visit 10 other Spanish cities and 14 Americans, the last one. them Miami on October 24th.

For Simon, it is a “privilege” to be able to present himself in front of his audience after the pause caused by the Covid-19 epidemic, and both Spain and the United States were the countries chosen to do so because they are “more advanced in vaccination” and “protocols are designed to party safely “.

“We are organizing ourselves to have the best concert possible, an amazing concert to tour now in Spain and the United States and also with the idea that it will be possible to play in Latin America more frequently,” he says.

In this sense, Martin asked his fans in Latin America, especially Mexicans and Colombians, “a little patience” because they will organize concerts when “it is safe for everyone”.

For Murat, live performances are very important because her main face as a group was associated with concerts and when the pandemic started they were “a little lost” because they never thought of spreading music in other ways.

“It got us really cold and we didn’t know what to do. We had to do a very conscious exercise to resume social networking vigorously, and do dynamics with our fans to maintain contact, because I insist our main connection with the people who listen to us was through parties,” Issa says.

The band hints at hope and passion for the future of their third studio album, which will feature singles released in recent months and songs not yet seen.

Juan Pablo Villamil, Murat’s fourth member, concludes, “There are so many unreleased songs and that’s the beauty of this third album because in the long run that sense of freshness and surprise the album can hold.”