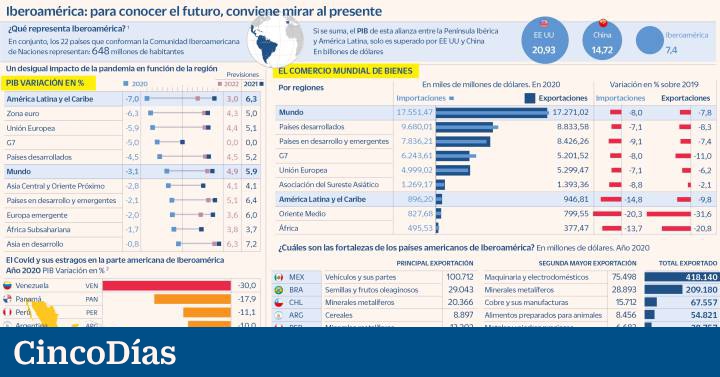 Once again, Latin America and 22 countries are at a crossroads. The Society of Ibero-American Nations, with the Ibero-American Secretariat (Segib) as the main institution and summits of heads of state as the most famous activity among the population, has always been said in this regard, an undeniable possibility. The population of Latin America together is 648 million people, and if the GDP of all countries participating in this alliance is added, the result ($7.4 trillion) will be overtaken by China (14.72 trillion) and the United States (20.93 billion). Despite this enormous potential, the challenges of realizing it are also enormous.

The Iberoamerica 2021 report, prepared by the research institution Fundación Alternativas, describes the situation. The Covid-19 virus left deep scars and exacerbated problems that already existed, but at the same time it opened a new dimension in the Ibero-American community that at the summit held in Andorra in April of this year began to speak seriously about facing problems in a common way.

Among the different world regions analyzed, Latin America was the hardest hit by the epidemic, and among the countries that make up the Ibero-American Club and are part of that geographic region, the impact has been highly uneven (see chart on right page). “This is a reflection of the persistence of obstacles to economic and social development, as a result of an economic model that mainly focuses on specializing in the export of primary goods or services with little added value, which in turn results from a relatively inefficient production structure and difficulties in adapting to the requirements of increasing international competition,” he said. stated in the document.

Data from the International Trade Center supports the diagnosis of the report. In the chart accompanying this information, the main exports of Latin American countries are grouped from Iberian America, and they already support the thesis of a high dependence on raw materials with notable exceptions such as the Mexican case.

Besides selling raw materials, economic growth in Latin America has been mainly dependent on maintaining low wages. “It must be remembered that maintaining competitiveness based on low wages contributes to entrenching inequality as well as being an obstacle to the substitution of capital for labour, which is necessary to increase productivity. This is precisely another problem of Latin America, where 76% of the GDP growth in 2000-2019 is by employment and only 24% by productivity, far from what happened in emerging economies such as China, where 96% of GDP is explained. Growth stabilized by improving productivity,” the report details.

The difficulty in increasing productivity is by no means the only obstacle. In addition to the security problems experienced by the population, added the political instability that hinders international investments, and leaves the excessive dependence on the latter his own bill in the countries of the region.

Former President of the Dominican Republic, Leonel Fernandez, participated in the discussion that accompanied the presentation of the Fundación Alternativas report. Fernandez made it clear during his speech that, unlike previous crises, the pandemic crisis has found a global consensus on the need to increase public spending to mitigate its devastating economic effects. The problem for the Latin American region in this regard is that there are no common mechanisms capable of providing such a strong response as those of the European Central Bank and the Federal Reserve.

In addition, debt problems, which had already plagued the region long before the virus arrived, were exacerbated. Fernandez spoke that although Latin American governments need more funding, promoting fiscal reforms that allow for higher revenues is an illusion.

The economies of the region, based on export processing zones, tourism or dependence on imports in order to meet the demand for machinery, simply cannot afford to increase the taxes of foreign companies investing in the club, because they will then leave. Other regions have lower rates.

However, Fernández wanted to contribute a note of hope based on the Ibero-American response from the Andorra summit: “There is a criterion of great value at the moment. It is the fact that there is no national solution to a global problem.”

It is the crossroads of Latin America that determines the way forward. Whether it will remain as it was before, or to promote greater cooperation between its countries to have a greater voice in a multilateral world dominated by large blocs such as the United States, the European Union or China. The upcoming summit of heads of state will determine the course that must ultimately be taken.