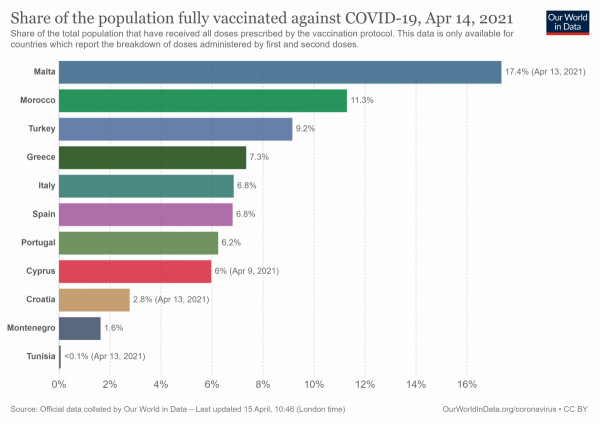 Vaccination is the goal of all tourist destinations in the Mediterranean when the season is shortly before the start of the season, despite all the factors of uncertainty at this time of the pandemic. However, the success of each of them is different and depends primarily on Vaccinations are obtained by each country, Then from your The ability to vaccinate the population. The differences are big between the northern and southern shores of the Mediterranean, and there are countries as small as Malta and Cyprus who are doing nothing wrong, quite the opposite. This is the vaccination arrangement at our main competing destinations in the Mediterranean, with a single dose and with both.

This is the graph that shows Malta as the absolute champion in vaccination among the Mediterranean tourist destinations. The country was vaccinated at a dose of 40.4% of the population, as of April 13. This is followed by Spain, where 17.6% were vaccinated with a single dose, and Portugal ranks third with 16.3%, both numbers from April 14th.

Malta plans to reopen its tourism business from June 1, and will implement a traffic light system as a standard for receiving travelers, categorizing exporters based on their Covid and vaccination numbers.

Greece, Cyprus, Turkey, Morocco and Croatia are in the middle of the chart, with good vaccination numbers. However, Tunisia and Egypt came last with 1.4% and 0.1%, respectively. Algeria does not appear on the graph.

Click on the image to see the larger drawing.

Greece She announced that, starting next week, it will cancel the commitment to stay in quarantine for seven days for travelers arriving from European Union, The United kingdomAnd the United StateAnd the IsraelAnd the Serbia s The United Arab Emirates, It is a first step towards the opening of tourism scheduled for mid-May (see: Greece takes another step in its opening and withdraws quarantine for 32 countries).

See also  The progress of negotiations with the IMF: Economics and Central Bank officials traveled to the United States

Cyprus It will reopen its borders to inoculated Britons from 1 June, without PCR or isolation for those who have received two doses of the vaccine, as we did in Cyprus, and it will reopen to the British inoculated from 1 May.

For its part, Turkey began vaccinating workers in the tourism sector this week. The Ministry of Culture and Tourism and the Ministry of Health expect that all workers in the sector will be in: Airlines, airports, hotels, accommodations, travel agencies and professional guides They are vaccinated at the beginning of the summer season.

Croatia also announced that it had begun vaccinating 70,000 workers in the tourism sector, in a program that will also include temporary employees.

We include Morocco, West, sunset In the analysis it is an important Mediterranean destination, although it is not a competitor to sunny and beach tourism. The country is very interested in the recovery of European tourists, especially the Spanish and the French, but last week it took a decision to suspend flights with Spain and France to protect itself from Covid. Rabat has canceled flights with 39 countries.

If we look at the percentage of the fully immunized population that received two doses of the vaccine, the resulting graph will be as follows.

Malta It still tops the ranking, with 17.3% of the population fully vaccinated; follow her Morocco, West, sunset By 11.3% and Turkey By 9.2%.

Greece e Italy They are in better shape than Spain, which as of April 14th showed a 6.8% immunization rate. Egypt It is not shown on the chart. 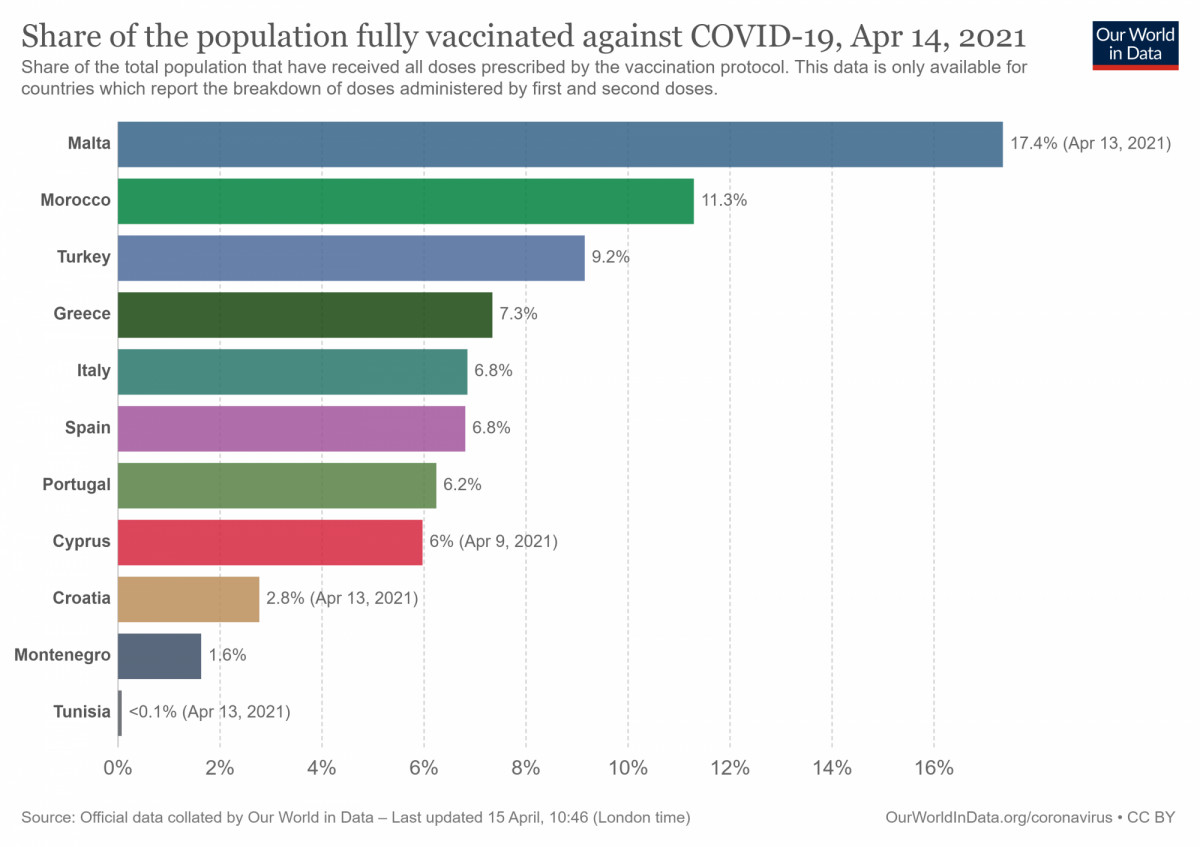 You can click on the image to see the graphic in a larger size.

North African destinations It practically disappeared from the tourist map. They are part of the countries that face difficulties when it comes to getting vaccines against Covid and immunizing their populations, as we explained in the disproportionate rhythm of vaccination by countries, which threatens global immunity.

The graph shows Turkey and Morocco for a possible comparison. Morocco is by far the country with the best vaccination strategy in North Africa. In contrast, Tunisia shows a very small percentage of vaccination with the first dose, 1.4% as of April 13, and still lower in Egypt, with 0.1% as of April 3, the most recent data they got from the country The percentage in Algeria is so insignificant that it is It does not appear in the graph. 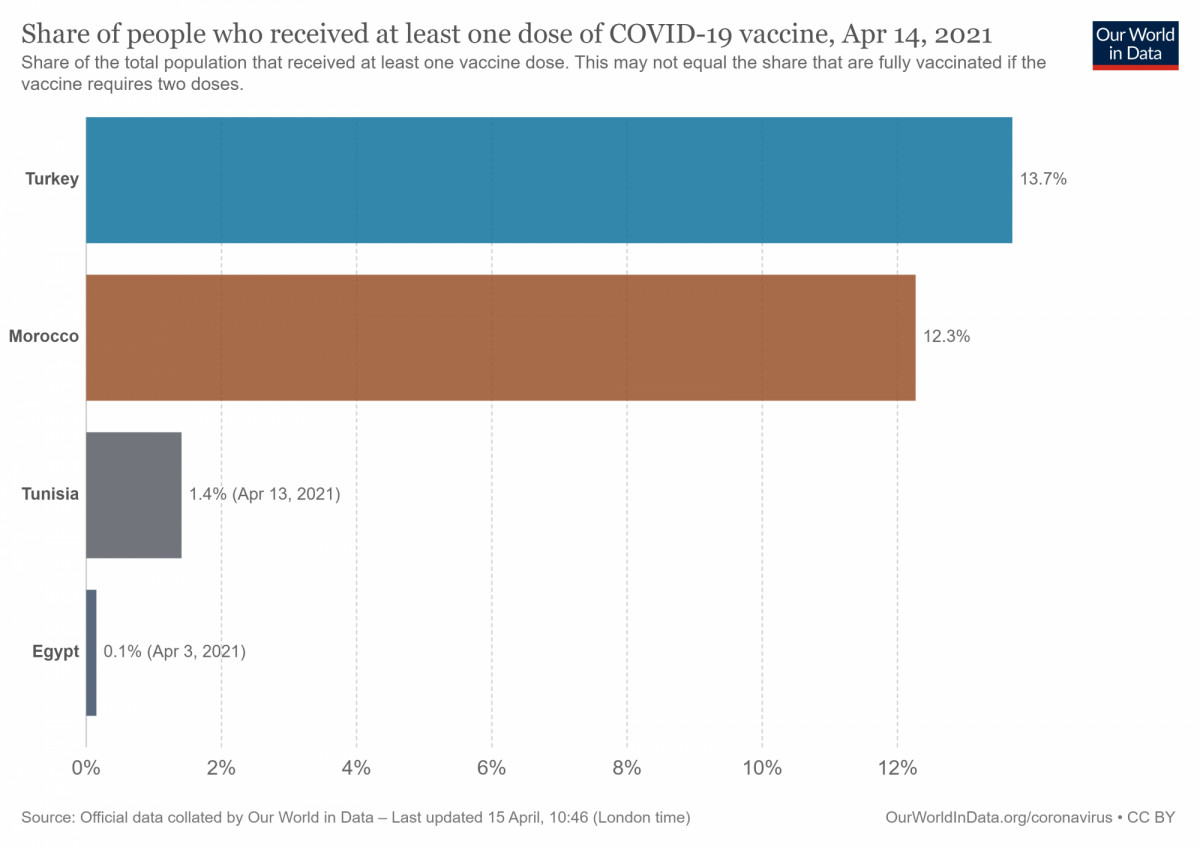 By clicking on the image you can see the drawing in a larger size.