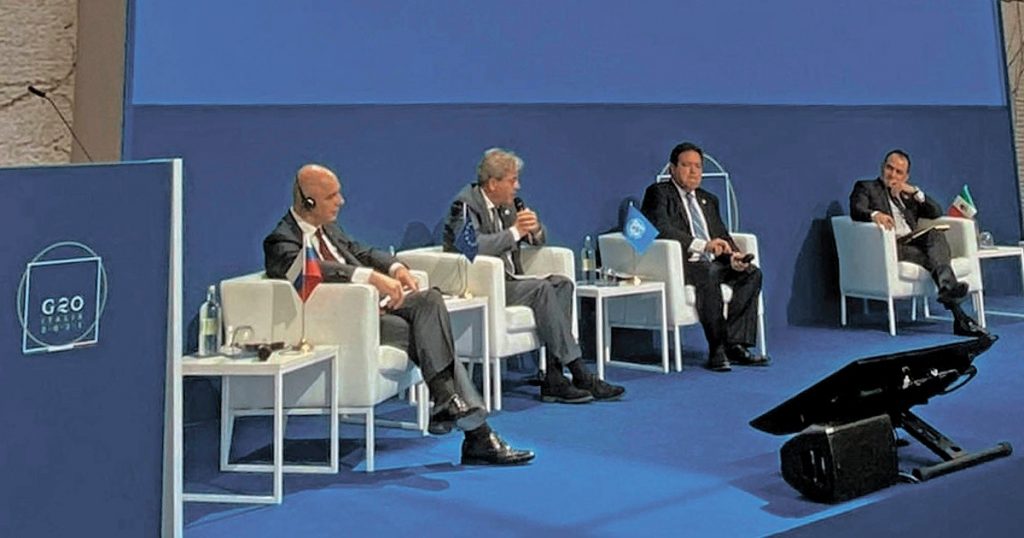 The G20 finance ministers, at their meeting on Friday and Saturday, ratified the historic agreement to tax multinational companies with a global minimum tax of 15%, as agreed at the beginning of the month. The Overarching Framework of the Organization for Economic Co-operation and Development (OECD).

Regarding taxes, we have reached an important agreement. Daniele Franco, Italy’s finance minister, said at a conference that many colleagues define it as historical, and it is supposed to have a more stable and equitable structure of the international tax system.

The G-20, which met in Venice, Italy, said it was “satisfied” with the agreement – which will take effect in 2023 – and called on countries to quickly address remaining issues to finalize the design of the framework that was supported. .

“We call on all CFC members who have not yet joined the international agreement to do so. We welcome the process of consultation with developing countries on assessing progress through their participation in the CFC and look forward to the October OECD report.

At the beginning of the month, the comprehensive framework of the Organization for Economic Co-operation and Development reached a historic agreement. Initially, the project supported 130 of the 139 jurisdictions that make up the overarching framework; Days later, Peru, Saint Vincent and the Grenadines joined, and the number increased to 132.

Meanwhile, Barbados, Estonia, Hungary, Ireland, Kenya, Nigeria and Sri Lanka were the countries that did not refuse to accept the agreement.

The Implementation of a Global Minimum Tax Agreement attempts to avoid the tax evasion practiced by many multinationals that causes Treasurys to lose, year after year, millions of pesos.

This happens because many companies, especially large corporations, are registered in some countries at low tax rates – known as tax havens – and also have subsidiaries with a physical presence in other regions, a situation they take advantage of to evade taxes and this, ends up damaging the coffers of countries through lost revenue.

In addition, the tax also focuses on combating the problem created by the digital economy in recent years, in which companies such as Facebook, Google, Amazon, Apple and the like receive millions of income without necessarily having a physical presence in countries, a situation they exploit to evade taxes .

According to preliminary estimates, the global minimum tax will leave an international amount of up to 150,000 million dollars annually, and will affect about 10,000 large multinational companies.

Janet Yellen, Secretary of the Treasury of the United States, has asked the European Union to reconsider its digital tax project, also called the “Google tax”, since the problem of digital companies such as Google and the like will be addressed by the global minimum tax.

The project implemented by the European Union in some countries, such as Spain and France, where some kind of special tax is imposed on digital companies, most of which are of American origin.

“(With the agreement reached), EU countries are invited to dismantle the current digital rates that the United States consider discriminatory, and to refrain from taking similar measures in the future,” he said.

On the other hand, the finance ministers of the world’s top 20 industrialized and emerging economies acknowledged the potential of digital transformation to boost productivity, while promoting the economy’s recovery after the COVID-19 crisis, and contributing to prosperity that reaches more people.

“We reaffirm that leveraging the vast amount of data generated by digitization is essential to better guide our decisions,” they said in their statement.

They added that they will continue to enhance monitoring and preparedness for global risks through “systematic integration of climate, health, and other risks”, to improve the design of future policies.

Reduce the evasion of multinational corporations

From the Italian city of Venice, he stressed that finance ministers and governors backed the agreement reached earlier this month to implement a 15% rate for multinationals.

We have just concluded a meeting since the G20 of finance ministers and central bank governors. They were extraordinarily successful meetings, especially since the most important point we were discussing was the approval of a global minimum tax, as we came to a historic agreement ensuring that tax evasion would be reduced, especially among large corporations. ” He said.

On other issues, the minister noted that there is talk of an uneven recovery of the economy between sectors and countries, in addition to the fact that countries have agreed on the need to continue monitoring risks and preparing responses to epidemics and/or climate in the future. they change.

“We’ve all come to the conclusion that we’re in the recovery phase, but we also had to accept that we’re in an uneven recovery,” he said.

Other topics discussed included reviewing the initiative to suspend debt service in the poorest countries, in addition to discussing mechanisms for achieving effective use of the Special Drawing Rights that the International Monetary Fund will distribute to its members next August.

This was Harrera’s last meeting with the G-20 finance ministers responsible for the Treasury. He will leave his post on July 15.