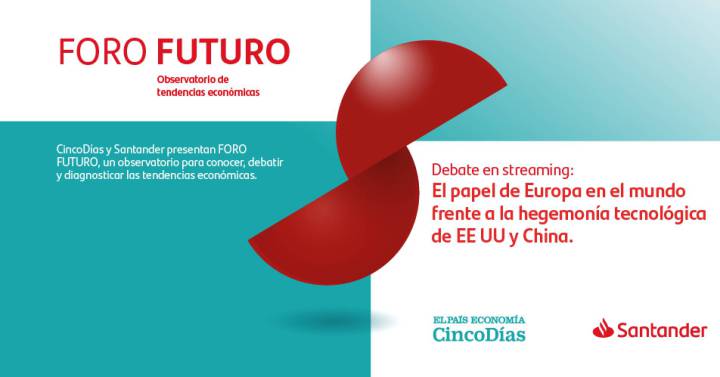 On Wednesday, a new meeting of the Foro Futuro, the Observatory for Economic Research organized by Cinco Días with the support of Grupo Santander, will raise Europe’s role in the world against the technological dominance of the United States and China.

Starting at 9:00 a.m., live on the Cinco Días website, the forum will be attended by Aguida Barra, China’s geopolitical and technological environment analyst. Chinese engineer and PhD in political science. Author of “China Roads to Power”. Santiago Carbo, Professor of Economic Analysis at the University of Granada and Director of Financial Studies at Funcas. Fernando Fernandez, Professor of Economics at IE Business School. Francisco Perez, Professor Emeritus of Economic Analysis at the University of Valencia and Director of Research at IVIE. It is run by Jose Antonio Vega, Director of Cinco Dias.

The open technological battle between China and the United States has exposed the very rare European presence in a game of mutual influence that is reaching global proportions and eliminating geopolitical interests. Europe’s role in the technological field is limited to a near-absolute dependence on the research and exploitation of new technologies born in the major companies of North America and Asia, especially Chinese.

A dependency that imposes an increasing burden on the European economy, as the expansion of technology giants into commercial and financial activities limits the business of European companies, such as banks, distribution companies, insurance companies or technology equipment companies.