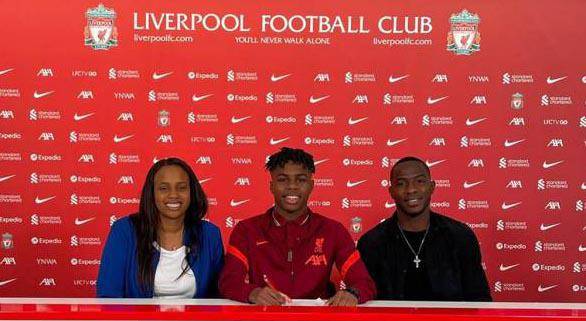 Gerardo Ramos, Director fenavothI spoke with Diario LA PRENSA to clarify the issue of the invitation to Kirol Figueroa By the United States explained why he did not accept the call from Honduras.

The United States has worked with the ball ahead of time on the issue of recalling its national under-17 team Keyrol, A 16-year-old striker who plays downhill liverpool england, Fenafuth was left waiting for an answer that had yet to arrive.

Gerardo Ramos He explained in detail who was responsible for the fact that Keyrol could have been called by Uncle Sam and not by H. .

“I don’t know if (Keyrol) has already decided to accept the call and I want to clarify something. We are friends with Minor FigueroaHe’s a home player, we have a good relationship, we have a lot of communication. I’ve been in contact with Minor for seven months. first, The kid didn’t want to come because he was trying out in Liverpool and now he’s there. Ramos began by saying.

He added: “Kirol has lived in England since he was one year old, and since that date he has gone to live in the UK and left Honduras 15 years ago, the kid has three passports and obviously if he’s in Liverpool, the Americans have a lot of structure, he’s They noticed him because he has talent,” the union admitted.

Gerardo Ramos It explains that they always asked the former captain of Honduras national team That he lent him to be called and there was a refusal, and his reasons will be so.

“I spoke with Minor and his wife and he assured me. Yes, we were invited (from the US), but in this establishment like Liverpool Education is of paramount importance and he has not abandoned it. I spoke with Mayor to bring him to the U-17 national team and he confirmed it was loadedwith the study and even sending me calendars.”

And it is that Mayor Figueroa, as the father of the footballer, is always looking for the best for his son, and that is why he left it up to him to decide what he wants, because he has three passports, and no doubt he will make the best decision.

“Minor has not assured us anything, though it is true that he is the father and all, He must want him to play for Honduras, Minor already knows Honduran equipment. We’ve been talking about this and that’s why it’s my turn to talk. He never told me no, but he did tell me clearly that the kid should think about it because he had three passports, two of them from first world countries (US and UK). Minor and Sandra never told me no or yes, they left it up to the boy’s decision.”

Ramos confirms: “You have to be realistic, the boy grew up outside Honduras, and more so in England and the United States, but we did not want to send anything (a call) without their consent. It is necessary to confirm if the boy would accept the call and Liverpool would abandon him. No He needs a choice to go to a team because he’s already there.”