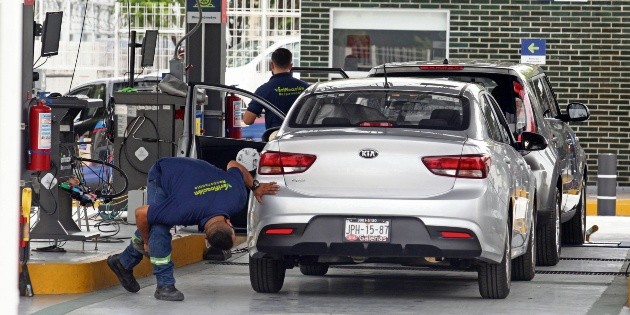 Physical and mechanical inspection of cars, raising Mexican Official Standard 236 of the Federal Economic Secretariat Can match verification vehicle who has already been in JaliscoI consider Tatiana clother; Head of the Federal Agency. He explained that the case was under review following instructions from President Andres Manuel Lopez Obrador that the examination proposed at the base did not imply additional fees for car owners.

“All in all, they can be restricted, because the ones who will end up carrying out the implementation are the municipalities and states. There is no way this could be (check again)“, He said.

The minister explained that they are working on developing proposals to convince that the physical and mechanical inspection will benefit the citizens By preventing accidents due to fault or avoiding already applicable fines for vehicle damage such as a damaged headlight or turn signal not working, etc.

One of the alternatives analyzed, he added, is to include the possibility that when plates are processed or endorsement is paid, a citizen voluntarily decides to have his vehicle checked at no additional cost.

The federal official commented that before November, the month in which the review would in theory go into effect, they would present to the president proposals to implement it without hurting citizens’ pockets and determine how it would be implemented or whether the rule would be reversed.

“We’ll look at the mechanisms by which it can be obtained and whether we can be persuaded that the application is voluntary with benefits such as avoiding fines. He added that there is a very clear mandate from the president that people’s pockets are not affected and if it could affect that then it should not be implemented as an obligatory matter.”

Tatiana Clauther reported that on her last trip to Europe, in addition to setting the calendar for Free trade agreement negotiations with the United Kingdom, he had approaches with British and German businessmen seeking to invest in Mexico, in areas such as supply chains. The official emphasized that there is confidence in the country and its workforce.

“They are open to getting close to the resource so that they do not risk the risks they have taken during the pandemic again. A global rearrangement is also envisioned and they know the great advantages that the country has. Each time I am happier, the big indicator that consists of our productive strength on Her ability, loyalty and commitment.” He commented, “There is confidence in Mexico.”

About investing in JaliscoAnd the clother He argued that the state would have direct and indirect benefits with upcoming projects, as it has established itself as a main center Attractive technology for foreign capital looking for job opportunities.