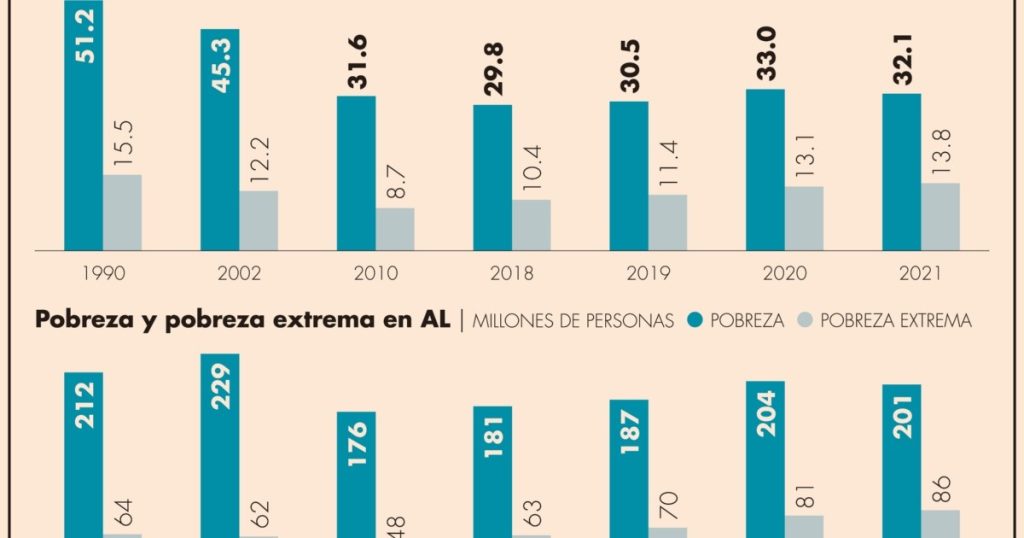 The extreme poverty rate in Latin America reached 86 million people after the pandemic, which means a 27-year setback as a percentage of the population, according to estimates by the Economic Commission for Latin America and the Caribbean (ECLAC).

This means that the number of people living in extreme poverty in the region increased from 70 million in 2019 to 86 million in 2021.

Within the Panorama of the Economic Commission for Latin America and the Caribbean, which set off from the Commission’s headquarters in Santiago, Chile, they explained that this deterioration in household income conditions resulted from the contraction of employment caused by confinement due to the pandemic.

Presenting the document, Executive Secretary Alicia Barcena explained that the health crisis and its impact on household income levels highlighted the vulnerability in which a large part of the population lives in the middle income strata.

Within the document, they dwell on this topic when they note that middle-income classes in the region’s societies often gain access to health, education, and care services through the private sector and at the expense of high levels of indebtedness.

So they propose a progressive fiscal compact with very specific goals to extend social coverage to a larger group of the population.

Parsina acknowledged the efforts of the region’s governments to grant emergency cash transfers, but acknowledged that it is not in itself a poverty alleviation strategy.

He highlighted the case of Mexico, which since before the pandemic has increased cash transfers to the most vulnerable families, such as the elderly, in 2019, and stressed the government’s efforts to ensure that such support continues even into 2024.

According to data from the entity, the number of the population living in extreme poverty in Mexico increased from 7.7% of the total in 2018 to 9.2% after the pandemic, which means an increase of 1.5 percentage points.

In the recent presentation of the ECLAC report where Barcena participated in her capacity as Executive Secretary, she emphasized that this type of transport has succeeded in reducing more people from falling into extreme poverty levels.

The official called on regional governments to maintain cash transfers as the health crisis continues, and at the same time develop strategies to increase public revenues and design broader social coverage programmes.

Economic weakness does not help

Then Barcena talked about the regional economic situation. He said the recovery in 2021 was not strong enough to mitigate the pandemic’s deep social and labor effects.

In the case of Mexico, he commented that in 2021 an arithmetic rebound of 5.8% was recorded, according to his estimates, which is lower than the 6.1% they forecast at the end of last year.

He said the better performance of the economy is linked to increased exports to the United States and an important influx of remittances.

But it is not a sustainable rate, and as of this year, it will start to resume the usual growth trend where GDP can be set at 2.9 percent.

He added that few countries in the region were able to return to pre-pandemic levels in 2021 and this trend will continue to decline in 2021.

Alicia Barcena will end her term as Executive Secretary on March 31 and has already been appointed by the President of Mexico to lead the government’s diplomatic academy, Instituto Matías Romero.

The Mexican official has been at the head of the committee since 1 July 2008.