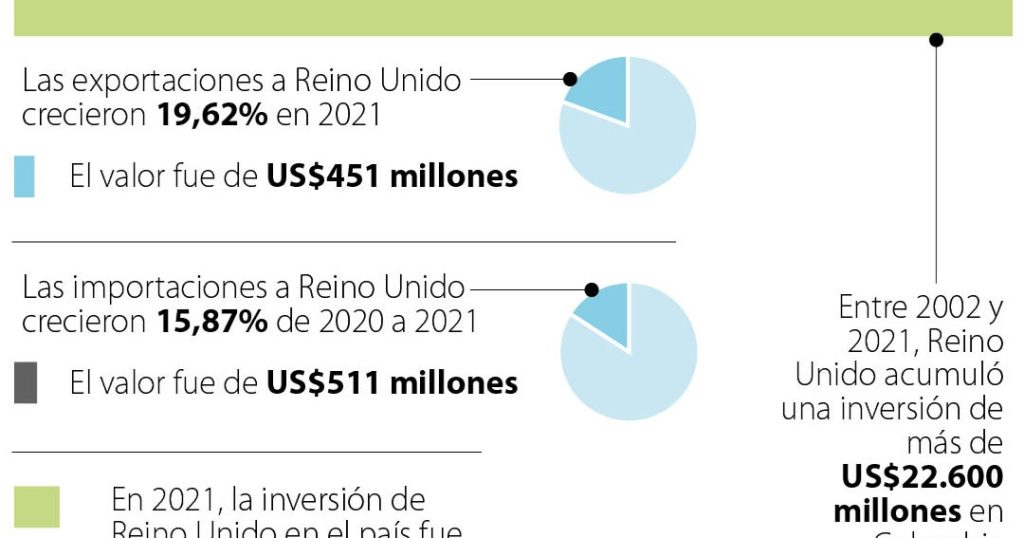 The British Columbia Chamber of Commerce (Britham Columbia) has announced the election of Santiago Uribe as the new CEO of the entity. Regarding this appointment, Jaime Gonzalez Moore, Chairman, and Uribe spoke with LR about business between Colombia and the United Kingdom.

According to Gonzalez, the binational relations between the two countries are in a period of prosperity, which is explained by the exit of the United Kingdom from the European Union. After Brexit, this nation is looking towards Colombia and Latin America, as it is, according to the director, the third largest investor in the country.

“Between 2002 and 2021, UK investments have accumulated over $22.6 billion, and in recent years large projects have emerged to develop them in various economic sectors, making these relations even stronger,” Gonzalez said.

The main products exported to the UK are bananas, charcoal, coffee, flowers and charcoal. On the other hand, the products brought to Colombia from the European country are ethyl alcohol, medicines, cars, monitors and laboratory equipment.

Regarding exports, Gonzalez stated that the products leaving Colombia for the UK grew last year by 19.62%, if the previous year was taken directly as a reference. The value of the products amounted to 451 million US dollars. Imports also saw an increase of 15.87% and resulted in a trade value of $511 million.

The outlook is very promising given that the UK, under these figures in 2021, was the sixth largest foreign investor in Colombia, with a total investment of over US$1,024 million. “The potential for growth is very large in many sectors of the economy,” Gonzalez said.

After the UK leaves the EU, tariff preferences and Free Trade Agreement (Free Trade Agreement) between Colombia and this region of Europe has been preserved. At this time, trade between the two countries as well as the Double Taxation and Investment Protection Agreement were maintained.

“They are all very valuable tools for increasing trade and investment as well as cultural exchange. We are also working on the issue of making the visa for Colombians more flexible, which will help a lot to unite the two countries even more,” Gonzalez said.

Uribe emphasized that, as the new director of the entity, he believes in the good moment in bilateral national relations and affirms that there is potential for the British Columbia business network in the country: countries have the knowledge and innovation to develop business. Regarding the challenges when assuming leadership of the entity, Uribe said “The first would be to increase the number of associates, the more associates we have with the same vision, we will have a much stronger community to develop together. The second, to enhance the Chamber’s services so that they become more innovative and support the business visions of our members; and third, Develop creative events that allow to generate connections between different participants with creative agendas and at the forefront of relevant issues at the national and international levels.”

Regarding the change of government this year, the director emphasized that no matter which candidate makes it to the Nariño Council, growth will continue to be steady. Uribe believes Colombia has agribusiness export potential that could be developed in the next four years.

See also  United States: The United States recommends its citizens to "avoid travel" to Tanzania due to the Coronavirus pandemic

The Director also maintains his optimism regarding the development of investment projects in infrastructure, clean energy and sustainability.

We also see great potential in terms of exporting services, financial technology and entrepreneurship. “The Chamber will continue to support our affiliates and the British Columbian business community to develop their businesses and identify new opportunities,” Uribe said of his management plan.

Progress made by the previous administration

The British Columbia Chamber of Commerce has confirmed that the previous administration of Michael Phillips made progress in placing the entity in various interest groups through virtual events that served to establish a “high-profile” relationship. There have also been alliances with private and public entities despite the challenging context left by the pandemic. The entity asserts that one of the remaining will be maintaining the Chamber’s services portfolio for its members, as well as betting on digitization.