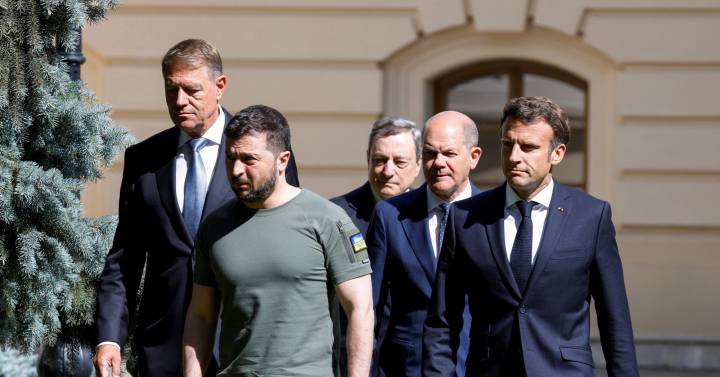 The heads of government of Germany, France, Italy and Romania announced, Thursday, their support for Ukraine in obtaining the status of a candidate country to join the European Union, in a joint visit to Kyiv unprecedented since the Russian invasion last February 24. .

After meeting with Ukrainian President Volodymyr Zelensky, the four stated that they would prefer Ukraine to obtain this status immediately, on the eve of the European Council (EC) meeting with this issue in Brussels.

“Europe is on your side, and it will continue until victory,” French President Emmanuel Macron declared at a press conference.

German Chancellor Olaf Schulz noted that the decision to accept Ukraine as a candidate requires the unanimity of the 27 countries, adding that Germany supports a “positive decision”, also for the Republic of Moldova, and urged an acceleration of the enlargement process. operation in the Balkans.

He stressed that countries wishing to join the bloc must meet “clear criteria”, which include, for example, respect for democratic institutions and the rule of law, and the values ​​that “distinguish the EU from others”.

For his part, the Italian Prime Minister, Mario Draghi, indicated that this path should witness “deep reforms” in Ukrainian society, which, he said, defends every day the values ​​of democracy and freedom on which the project is based. European List”.

Zelensky emphasized that his country had chosen the path of integration in Europe, a path that was “historically proven correct”, and noted that Kyiv aspires to become a “reliable partner” and is a full member of the Union.

“The majority of the continent’s population supports our aspirations,” he stressed.

The five heads of government also discussed the issue of arms supply to enhance the defensive capabilities of the Ukrainian Armed Forces and Zelensky once again seized the opportunity to request urgent support.

He said the situation was “extremely unstable” in the regions of the country affected by the Russian attack and every arms shipment “saved human lives”.

He added that Russia is attacking “kindergartens and schools” and pointed to the deaths of a large number of soldiers and civilians so far, which is why Ukraine needs “effective anti-aircraft systems”.

In response to his call, Macron announced the dispatch of six heavy Caesar self-propelled guns, while Schulze, who has been much criticized for the slow pace of German military support, said he had agreed to supply Cobra radars to help in defense. Cities against air attacks.

In addition, he noted that Germany has reached a tripartite agreement with the United States and the United Kingdom to supply Kyiv with multiple missile launchers.

The peace agreement with Russia is far-reaching

On the eve of the European leaders’ visit, there was speculation that they intended to pressure Zelensky to accept commitments in the face of a final peace agreement with Russia, an extremism all denied.

Schultz stressed that there can be no “imposed peace” and that it must be “the government, the parliament and the people of Ukraine” who decide what is acceptable to achieve a peace that is “very, very far away”.

Draghi delved into the same idea and noted that a diplomatic solution cannot do without Kyiv’s “will”, without which a “lasting and just” peace cannot be built.

In this sense, Zelensky stressed that Russia is not ready to abandon the “track of confrontation” and that in order to resume the stalled talks, Ukraine is waiting for “proposals” and “real measures” from Moscow.

He noted that even the presence of European leaders did not deter Russia from threatening the Ukrainian capital today, as anti-aircraft alarms sounded twice, the first shortly after the heads of government disembarked from the train that took them to Kyiv.

Macron, for his part, defended his phone calls with Russian President Vladimir Putin, stressing that although the situation on the battlefield now “does not allow” the resumption of peace negotiations, talks with the Kremlin are useful and “must happen.”

On the other hand, Romanian President Klaus Iohannis highlighted efforts to transport Ukrainian grain by rail and alleviate the food crisis caused by the invasion of the country, one of the world’s largest grain exporters.

He also called for opening sea lanes for the safe export through the Black Sea of ​​the tons of grain still blocked in Ukrainian ports.