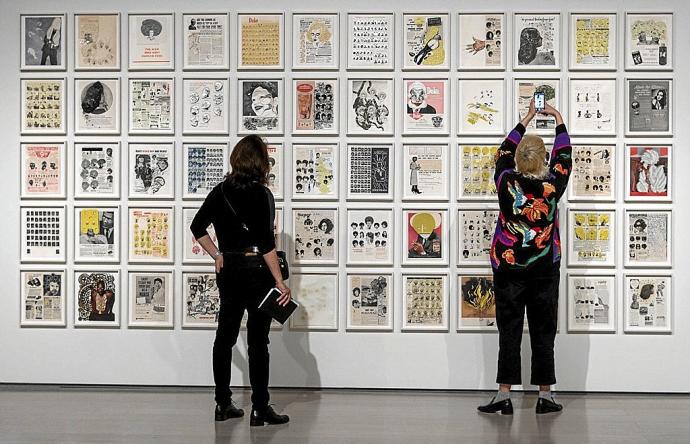 Santander Seeing Colonialism, Environmental Protection or Mythology in Dialogue with the Atlantic by American artist Ellen Gallagher arrives at the Bottin Center in Santander with the exhibition Law… Scheme… Scale. The gallery, which can be visited until September 11, showcases two decades of the 56-year-old artist who was unable to attend the show because she was “exhausted” after completing the installation. He does this through three spaces and three film installations created in collaboration with Edgar Clejine, as he analyzes his vision of the ecological and ethnic impact of grand buildings, maritime legends, and the extraction of natural resources in the colonial era.

The curator of the exhibition, Barbara Rodriguez, also explained that Gallagher was “fascinated” by the location of the Putin Center, next to Santander Bay, and this was an “important” factor for the artist to choose that space, for its “connection” with the water.

In the first part of the exhibition, the viewer finds himself gothic highwaya synthetic film that critically reflects on the construction of Interstate 10, which crosses the Mississippi Delta bordering New Orleans.

Environmental Impact Gallagher and Klein decried the “destruction” of a large wetland of building infrastructure, with its ecological impact on the area’s crustaceans and the subsequent displacement of the population, mostly Latinos and blacks. It all consists of 16mm projections and outlines printed on canvas onto 70mm film, while a demo rock song by Finnish band Circle plays in the background.

The second space relayed by Gallagher focuses on myths, legends, and the depths of the sea, in a series of “at the same time figurative and sculptural” works of asexual, tentacled characters.

This attachment refers to drixiaa legendary underwater world inspired by the Detroit musical duo of the same name, which charts a universe inhabited by descendants of slaves who jumped off ships on their way between Africa and the United States, the curator explained to reporters on the exhibition.

In a third space, Centro Botín displays Gallagher’s black paintings, a monochrome sequence begun in 1998 and shaped by the artist with plastic and enameled rubber bands.

In it, the American artist denounced the extraction of natural resources such as oil by colonial countries.

In addition, it is also displayed Better yet, a viewing space with music by jazz artist Sun Ra, who presents slides with the head spinning John F. Kennedy on LP Vinyl. In this last room there is also a fossilized whale skull on display at the Cantabrian Maritime Museum.