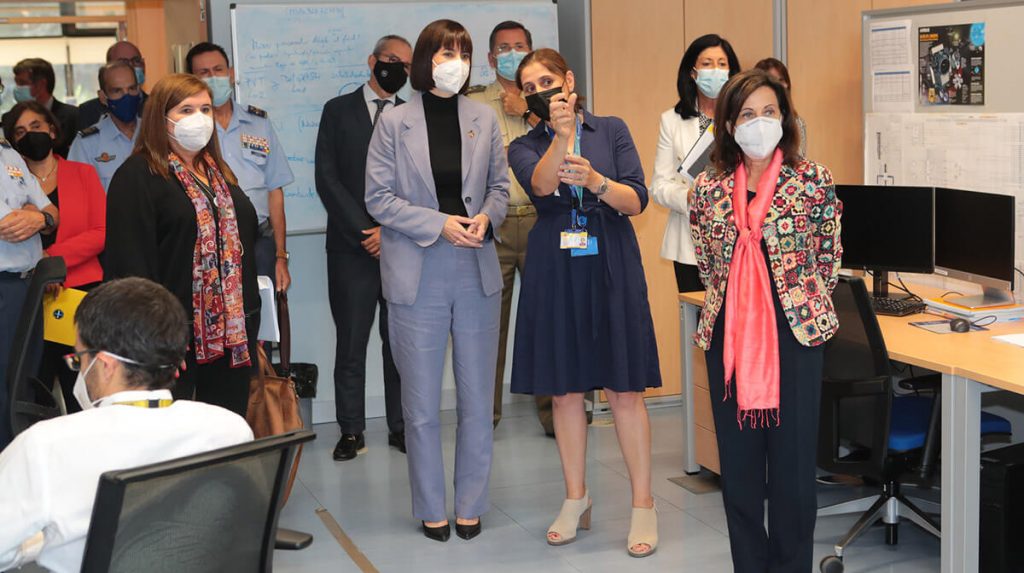 Defense Secretary Margarita Robles and Science and Innovation Minister Diana Morant visited on Wednesday and held a working meeting at the National Institute of Aviation Technology (INTA) ‘Esteban Terradas’, which specializes in research and development in areas such as aviation. , space and security, among others.

The ministers are accompanied by Defense Minister Esperanza Castelero and Secretary General for Innovation Teresa Risgo. He was received by the Director General of the Institute, Lieutenant-General Jose Maria Salom, Which presented a presentation of the capabilities of the center in the field of aviation. Later, they moved to the Center for Astrobiology (CAB) and the INTA-Torrejón Space Center where they visited the facilities by their directors, Victor Barro and Eva Maria Vega, respectively.

The two ministers were particularly interested in operating the various satellite missions that are operated from INTA. During his presentation, Lieutenant General Salom stressed that Spain, through INTA, has “a wonderful relationship with NASA and the European Space Agency (ESA).” He emphasized that, in the spatial domain, it is European research standard and collaborator with NASA; It is currently developing more than 50 lines of research, within its R+D+i strategic objectives, with a dual spatial and flight approach.

INTA is a leading Earth observation company, setting its sights on the Sun, Mercury and Mars with its missions to explore the Solar System. Spain has been on Mars, specifically, since 2012 through INTA’s Center for Astrobiology (CAB) and has three instruments on three different missions (Curiosity and Perseverance rovers and the RPAS Insight lander), which is a milestone, except for the US No other country can claim yet.

Also, along with Germany, Italy and the United Kingdom Leading the European Space Agency’s ambitious PLATO space telescope, Which is expected to be launched in 2026 and will have the ability to describe Earth-sized planets orbiting other suns or stars in previously unseen detail.

National Institute It also operates the European Space Agency’s CHEOPS space telescope Since December 2019 it has been participating in JWST (James Webb Space Telescope), the most powerful and complex of NASA, a leading science project to which ESA and CSA (Canadian Space Agency) also contribute, which is scheduled to launch by the end of this year.

Another upcoming release is the Raman Laser Spectrometer (RLS) for the European Space Agency’s ExoMars mission, a tool for mineral characterization and search for organic compounds.

Another of its main branches of research and development is the field of aviation, where INTA is working to become a leading European power in terms of testing facilities known as drones, Or more specifically RPAS (Remote Piloted Aircraft System) and related technologies in the military, civil and dual domains.

Finally, in cooperation with the Ministry of Science, it is studying to give superior capabilities to the Aeronautical Research Platform (PAI), which will provide support to the Spanish and international scientific and technological community from 2023.