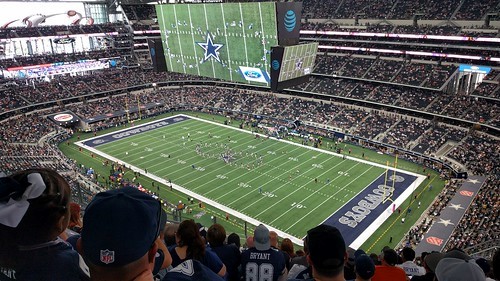 Billion-dollar stadiums are now all the rage, with money seemingly no object when it comes to giving paying fans the most luxurious of surroundings in which to enjoy their sporting spectacle of choice. Gone are the days of back-breaking wooden seats and having to join an actual queue for a drink and a hot dog. The customer is king and elaborate thrones are being assembled to keep them happy.

The Dallas Cowboys were among the first to embrace this modern-day mindset, with Jerry Jones looking to embody the ‘everything is bigger in Texas’ mentality. He overspent on what is now AT&T Stadium, but that quickly became part of the appeal for locals and added to the mystique for those watching on from afar. What do you get in a €1 billion venue?

Unfortunately for Jones and Co, success has not formed part of the answer to that question. Super Bowl rings remain elusive, with the Cowboys yet to throw the ultimate house-warming party some 12 years on from the keys to the new abode being acquired. Could 2022 be the year that changes? The latest NFL odds from Betfair have ‘America’s Team’ as 10/1 shots to hoist the Vince Lombardi trophy aloft at SoFi Stadium – a venue which cost almost $5 billion to construct.

Therein lies part of the problem for the Cowboys – they are no longer the only ones looking for tangible success to justify the eye-watering outlay. A shiny new construction in Los Angeles is built on similar levels of expectation.

There is, of course, a house-share situation going on in California, with the Rams and Chargers racing to become the first side to deliver silverware in LA since the legendary 1984 Raiders of Jim Plunkett and Marcus Allen. The Raiders of the present, settling down just off the strip in Las Vegas, have found a billion-dollar dwelling of their own in 2021-22 and are as success-starved and ambitious as countless others.

The Atlanta Falcons, Jets, and Giants of New York and Minnesota Vikings also occupy homes that required 10 figures to construct and continue to cling to the belief that their time is coming – if you put the right pieces in place off the field, everything will fall into place on it.

Can the Cowboys Do It?

Hope springs eternal for a loyal fan base, but those dreams have been dashed on more occasions than may care to remember in recent times. Even though you have to turn the clock back to 1996 to find the last time in which the Cowboys got the job done, as a run of three triumphs in four memorable campaigns came to a close.

To put things into perspective, Tom Brady was four years away from being selected by the New England Patriots with the 199th pick of the 2000 NFL Draft. A lot has happened since then. The world is a different place. The 2021-22 Cowboys are, however, showing signs that – after significant investment in contracts for the likes of Elliott and Prescott – they are ready to deliver.

The champagne remains on ice and party poppers are locked away in a storage cupboard somewhere deep in the heart of AT&T Stadium, but Jerry World is ready. They have never needed an excuse to go big in Arlington.