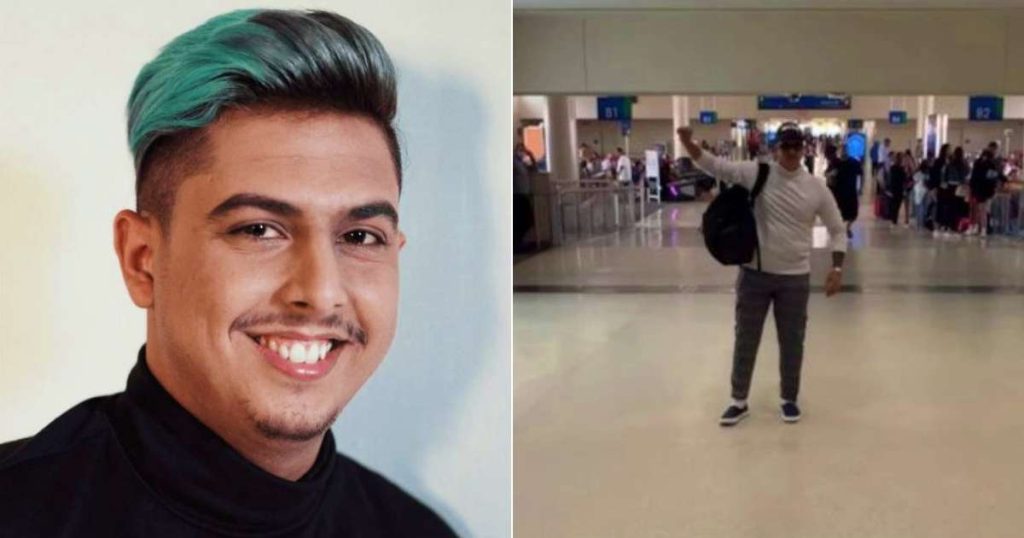 The influential The Cuban comedian Jose Ernesto Gonzalez Carnottaauthor of the popular poem We are going to Nicaragua.They arrived in the United States, as announced Wednesday on their social networks.

“I’m a hero! I’m already in the zone!”Carnotta wrote with a short video clip in which he is seen celebrating his arrival at a US airport with an impromptu dance.

In the photos, a clip of the Queen’s song “We Are Champions” is heard, then gives way to another song by “a hero”Cuban reggaeton song Kimikowhich has become a veritable anthem for many of the island’s citizens who in recent months have arrived in the United States across the border.

After Carnotta announced that he was already on American soil, dozens of followers of the comedian, many of them artists, immediately congratulated him or commented on the news.

“I thought you weren’t going to put a Kimiko, I was going to tell you a bunch of things”The Cuban singer commented Diwan In reference to the music that the young man was announcing his arrival.

In a video posted on June 8 from Mexico – in which he showed emotional images of his last moments on the island – Carnotta detailed his departure from Cuba, his first experiences in Mexico and announced that he planned to cross to American soil.

A few days ago, on May 30, The influencer had announced on his social networks that he was leaving the islandalthough at the time he did not specify the country of destination.

“Farewell is often sad. I will leave without knowing what is going on, you know very well that I am, but I keep coming home.” I wrote this version of a song by Carlos Varela and I like to say goodbye to Cuba, ”Carnotta wrote on Instagram, where Covered by Varela song mentioned above.

“I want to thank you for helping me grow and for the lovely support I received in these three years. It has been a very beautiful phase of my life and now is the time to improve even more and take on new challenges and goals with more enthusiasm than before. I left behind my country, my childhood, some of my friends And part of my family, it’s hard to understand what it’s like, it sounds simple, but it’s sad,” concluded the influencer, not without first wishing that Cuba would find happiness “someday.”

José Ernesto González Carnota started his career by making prank calls to celebrities and sending audios to WhatsApp groups. Only three years later, He accumulates more than 267,000 followers on Instagram and more than 95 thousand on YouTube.

Among his Internet hits is a parody of the popular Netflix series “La casa de papel” which Carnota nicknamed “La casa sin papel” – it tells the story of a group of Cubans who, due to imperfection, decide to rob a bank.

“One of my dreams is to have my own TV show, either in Cuba or abroad. I know I’m going to make it. And I’m going to watch this interview, and I’m going to catch it and I’m going to comment: ‘Look, I said it three years ago.'” More than just a dream, it’s a goal I must achieve. ,” Carnotta said last year in meeting with CyberCopa.

See also  A question mark and double letters from the round