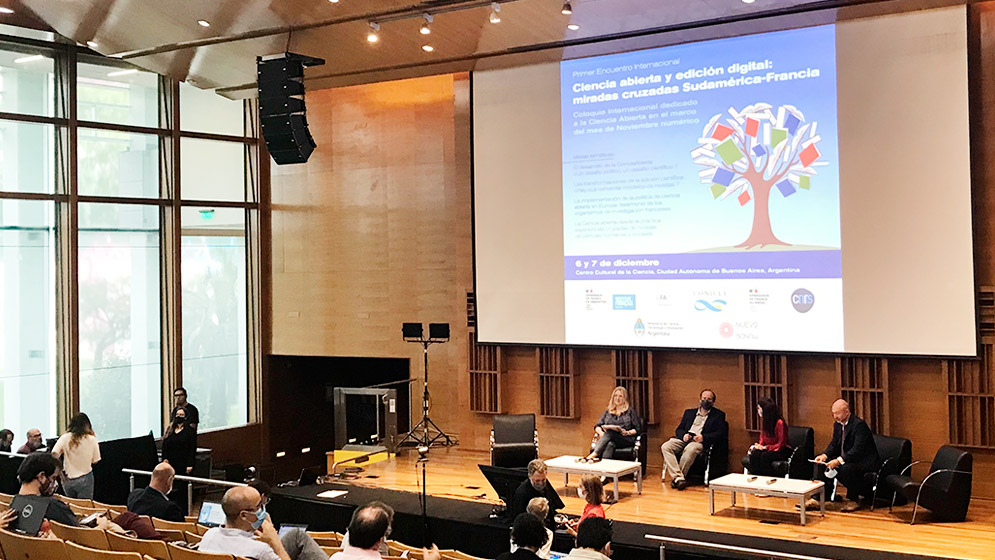 This first international meeting, actually held at the Cultural Center for Science (C3), sought to deepen the dialogue between France and Latin America about open science. At the same time, it was proposed to provide a greater view of an area that has pioneered the openness and accessibility of scientific research.

Within the framework of the November numerical month, this space is organized by the French-Argentine Center for Advanced Studies at the University of Buenos Aires, together with the French embassies in Argentina and Brazil and the French National Center for Scientific Research (CNRS), and with the support of the National Council for Scientific and Technical Research (Conicet) and the Ministry of Science, Technology and Innovation (MINCyT).

During the opening, Lionel Paradisi Coloma, Counselor for Cooperation and Cultural Action, Director of the French IFA Embassy in Argentina said: “In the past 20 years, the production panorama and especially the dissemination of scientific information has seen a radical change from the hand of the digital revolution. Researchers from all fields of knowledge have partnered with research organizations in A unidirectional path, and there will be no turning back. The open flag is today one of the strategic axes of science policies.”

One goal: the production and public circulation of science

In turn, Mario Piccini, Vice President of Scientific Affairs at Conicet said: “In an event with such an important topic, what I want to emphasize with this open science is its public nature. I love the word public and public science and with this interconnectedness that comes to us with the development of virtuality.” by the public in the sense that it re-establishes the common interest, that it is not private, except for some and some, that it depends directly or indirectly on public funds, in the sense of propaganda to make the transfer, something that is not so hidden, public in the sense that it is accessible and its political meaning is linked to consultations democracy. Finally, the public relates to the test of publication as the right to freedom of publication as a means of communicating the results of investigations and the foundations also established generally from public funds.”

After highlighting the key role of organizations such as Conicet, MINCyT and their equivalents in each country, Pecheny concluded that “the preservation of scientific advertising on a global scale and on the scale of our countries is not possible without the resources and in this sense those of us who are in intermediate places of administrative work, where Our nations recognize the high priority nature of supporting scientific publications and that allows what we do to be accessible, not a privilege.”

Subsequently, Guadalupe Díaz Costanzo, Director of C3 stated: “This cultural center is a space that deals within the scientific-technological pole, among other things, with being a meeting place between society, the scientific community and science. I think that this meeting is quite timely and relevant and that Bilateral discussions take place here as a space in which parts of public policy are represented in the public communication of science.”

From Brazil, Olivier Giron, Counselor for Cooperation and Cultural Action at the French Embassy in Brazil and later Olga Anokhina, Director of CNRS South America, present at C3, closed the opening.

The evolution of open science: a political challenge, a scientific challenge?

After the opening, the first table was held: “The development of open science: a political challenge, a scientific challenge?” It is run by Maud Pelissier, Attaché for University Cooperation, French Embassy in Brazil and Director of Campus France Brazil.

Fernanda Beagle, Principal Researcher at Conicet, Coordinator of the MINCyT Open and Citizen Science Committee and Chair of the Open Science Recommendations Committee (UNESCO), who recently participated in Paris, France, at the UNESCO General Conference where a “Recommendation on Open Science was approved”, a framework International, to be adopted by the 193 countries attending the meeting, which aims to transform science into a more equitable and inclusive tool.

The event is illustrated in thematic tables for the discussion of specialists, researchers, institutional actors and pioneers in this topic on the following themes: Challenges inherent in the development of open science; State of the art science after twenty years of first initiatives in open science and a reconfiguration of the scientific publishing ecosystem.