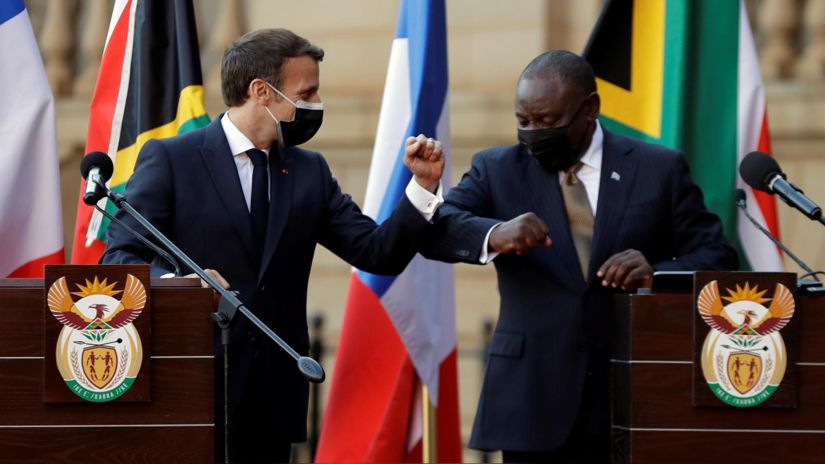 President of France, Emmanuel MacronToday, he advocated technology transfer to Africa So that the continent, which is lagging far behind in immunizing against COVID-19, can produce Vaccines To fight the epidemic.

“It is about allowing more production in the existing factories and increasing the capacity of the stakeholders (…) because it is necessary to produce more Vaccines, Especially in AfricaWhich accounts for approximately 20% of needs and 1% of production, ”said the president in Pretoria, where he is on an official visit as part of his tour these days for Africa.

In a joint press conference with his South African counterpart, Cyril Rambahosa, the French President, who arrived in South Africa today for a two-day state visit, stressed the need to “vaccinate the largest possible number of people as soon as possible.”

And therefore, Emmanuel Macron He noted, “It is important to have a transfer of technology.”

He insisted that “it cannot be merely temporary licensing, but knowledge must be transferred to ensure that other parts of the world can produce Vaccines To fight this epidemic. “

In addition, he assured that his country will help South Africa and other African countries to develop their production capacity.

Ramaphosa, for his part, referred to the suggestion that his country lead side by side with India to the temporary suspension of intellectual property rights in Vaccines Against COVID-19 thus putting an end to – as he recently said – “imperialism” Vaccines.

Today, the South African head of state called again for a “waiver for the duration of the pandemic to allow countries to gain capacity and production.” Vaccines“.

“Africa Note – is developing its own production capacity طاقته Vaccines And its ability to ensure the security of supply. While financing is the key, it must be complemented by technology transfer.

“President Macron and I share a commitment to make knowledge of health products and technologies for COVID-19 a global public good,” Ramaphosa added.

Macron and Ramaphosa plan to launch a day program at the University of Pretoria to support production Vaccines Africans are supported by the European Union, the United States and the World Bank.

The World Health Organization announced yesterday that Africa Urgently needed at least 20 million second doses Serum From the pharmaceutical company AstraZeneca in the next six weeks, so that those who get the first will also be inoculated with the second in the recommended period.

The World Health Organization has warned of another 200 million doses of any Serum Against COVID-19 so that the continent can vaccinate 10% of its population before September 2021.

The European Union, its member states, and the United States each pledged to share more than 100 million and 80 million doses, respectively, with low-income countries, and promised that the World Health Organization “is necessary to accelerate”.

The lack of supplies from India, due to the serious health crisis in the country, has caused delays in the receipt of medicines produced at the Indian Serum Institute and that Africa It is mainly received through the COVAX Mechanism, which is being promoted by the World Health Organization to ensure universal and equitable access to Serum.

The Covid-19 Put everyone on alert. Subscription In our newsletter everything about the Coronavirus, where you will find the most relevant daily data for the country and the world about the progress of the virus and the fight against its spread.

‘Espacio Vital’: Lancet Global Health publishes a study on the seroprevalence of Sars-Cov 2 in Iquitos