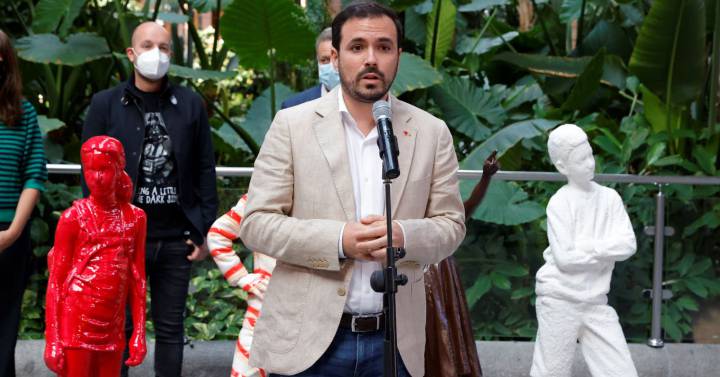 From 2022 and directly through a royal decree, the Ministry of Consumption will regulate the broadcast of advertisements for unhealthy foods and drinks directed at children under 16 years of age on television, radio, social networks, websites, apps, cinema and print media.

It will thus replace the PAOS Self-Regulatory Act, in force since 2005, which, according to the Minister of the Branch, Alberto Garzon, “does not work effectively”, constitutes “many failures” and has been found to be “insufficient”.

This was announced by Garzon at a press appearance after his meeting with the mayor of Barcelona, ​​Ada Colau, to discuss joint plans on healthy eating and in which he presented that the measure would affect television, radio, social networks and websites. Applications, films and print media will be guided as a measurement standard by the nutritional profiles developed by the World Health Organization (WHO).

Consumption calls for a “minimum” regulatory framework to follow recommendations from international organizations and “assimilate” Spanish regulations with those of countries like the UK, Portugal or Norway, according to Garzon, who insisted that minors are “consumers at risk and we are committed to protecting them from advertising” .

Going into the details of the new regulation, Garzón advances that the new regulation will affect the enhanced security schedules and advertising space for children’s programming and will regulate both linear and non-linear television, radio content, cinemas, and advertising over the Internet, social networks, websites or mobile applications, when directed The contents are intended for minors under the age of 16.

As an example, present the case of television, where there will be a schedule of enhanced protection that will “determine at any moment” that advertising, including programs directed at this audience, may not be broadcast “before, during or after”.

The regulations will also place limits on advertising in print media, and depending on consumption, depending on these venues, companies may have their own self-regulatory “so long as it involves a higher protection framework than the rule itself.”

The Garzón Treasury has chosen to establish as the standard for measuring nutritional profiles established by the World Health Organization (WHO), and according to Garzón, the regulation will affect five categories of products that will not be able to be advertised to minors regardless of the nutrient content.

The first category is chocolate products, sweets, sugar, energy bars, sweet additives and confectionery; Second, the food group that includes cakes, sweet biscuits and other pastry products, and three other categories consisting of juices, energy drinks and ice cream will also not be announced.

For the rest of the product categories, a limit will be set on the nutrient content per 100g, in which case it can be declared as long as total saturated fat, total added sugar and salt levels are maintained. Below the limits set for each product.

Garzón justified the need to replace the current self-regulatory system, citing “disturbing and alarming” figures such as that more than 23% of 6-9-year-olds in Spain are overweight and more than 17% are obese, according to the Aladino’s 2019 study, is convinced that advertising is “another vector” behind this “serious public health problem” that affects “very vulnerable” groups such as children and adolescents, who are overweight for an extended period of time,” the minister said.

For its part, the Mayor of Barcelona announced that its council will regulate, through two municipal directives, the presence of advertisements for foods and drinks harmful to health in public places, and will promote the presence of healthy products in food services located in public facilities. .

The municipal directive, to be approved in the coming weeks, focuses on promoting a “healthier, fairer and more sustainable” urban diet, in accordance with the commitments made by the Barcelona City Council in the 2015 Milan Charter and in the framework of action to designate the city as the 2021 World Capital of Sustainable Food