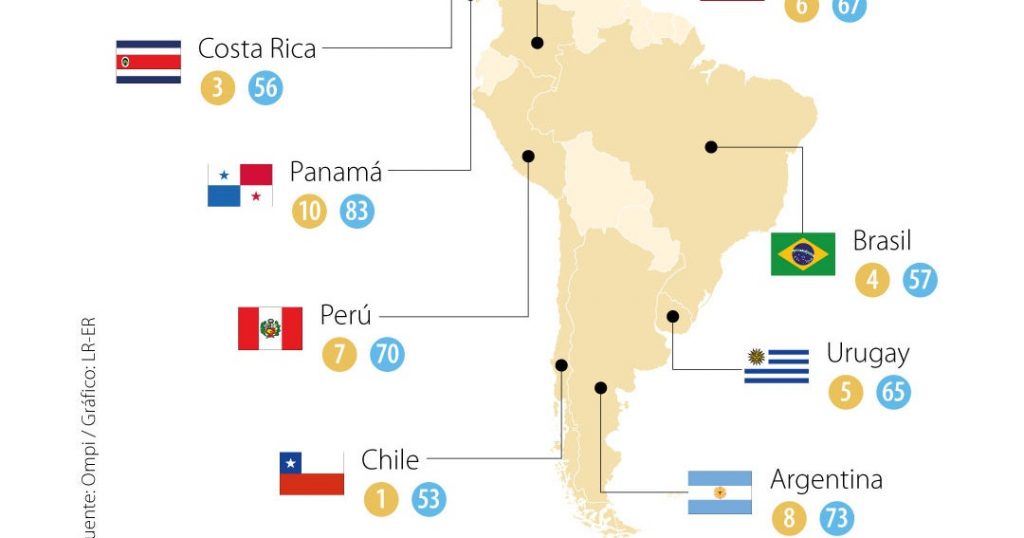 The World Intellectual Property Organization (Ompi) has revealed its latest edition of the Global Innovation Index, in which Chile is emerging as the most innovative economy in Latin America in 2021.

To develop this ranking that rates 132 countries, Ompi, which is part of the United Nations, takes into account factors such as institutions, human capital, research, infrastructure, business development and markets, as well as the creative production of knowledge.

Thus, among the countries of the region, Chile appears in the first place at number 53 globally. They are followed by Mexico in 55th place and Costa Rica and Brazil in 56th and 57th places, respectively.

Then comes Uruguay as the fifth largest economy creative Latin America, 65th in the world. Then Colombia ranked 67th out of 132.

At the top of the ranking, Switzerland tops the top ten among the world’s most innovative economies in 2021, followed by Sweden, the United States, the United Kingdom, and the Republic of Korea. The Netherlands, Finland, Singapore, Denmark and Germany follow in that order.

In this release, the Index provides a special monitoring of the occurrence of the COVID-19 pandemic in innovation, research and development.

According to the Ompi study, governments and companies in various parts of the world have increased their investment in innovation, despite the human and economic cost caused by the pandemic last year.

Investment in innovation reached an all-time high before the pandemic, and R&D grew 8.5% in 2019.

In 2020, this data continued to grow: worldwide publication of scientific articles increased by 7.6%; International patent applications, through Ompi, reached a new all-time high last year (3.5% increase was due to medical technology, pharmaceuticals, and biotechnology); Furthermore, venture capital agreements grew by 5.8%, exceeding the average growth rate of the past 10 years; Hence, there were increases in other pillars.

GII 2021 sees innovative sectors of the global economy remain strong, despite severe shocks. To beat the pandemic and build back better, we will have to continue to support the translation of great ideas into innovative products. “

However, this is not the case in Colombia. The country has been stuck at the bottom of the average world ranking for the past three years, ranking 67th and 68th.

In addition, in the 2021 ranking, Colombia ranks 17th out of 34 economies in the upper middle income group.

Regarding this, Manolo Castro, Partner and Founder of Mindhack, a Colombian startup focused on fostering innovation within companies emphasized, “We feel like we are innovative, but we are really resourceful. We are used to this intuitive attitude and we do things quickly. We are resourceful, but we are not innovative.” .

Regarding the GII, Castro added, “The most interesting thing about this ranking is that one of the most important gaps comes from talent. One might think it has to do with infrastructure and other dynamics, but when you look at the details, it is presented in terms of talent, and that Something is evident in various projects, in companies that are looking for talent.”

In the foreword to the report, Ecopetrol President Felipe Payon spoke about the company’s responsibility to drive innovation: “At Ecopetrol we know we can’t do everything on our own, which is why we have strengthened our work in alliance with public and private entities, including Microsoft and IHS Markit. and Plug and Play, iNNpulsa Colombia, the Israel Innovation Authority, and the Colombian Ministry of Science.”