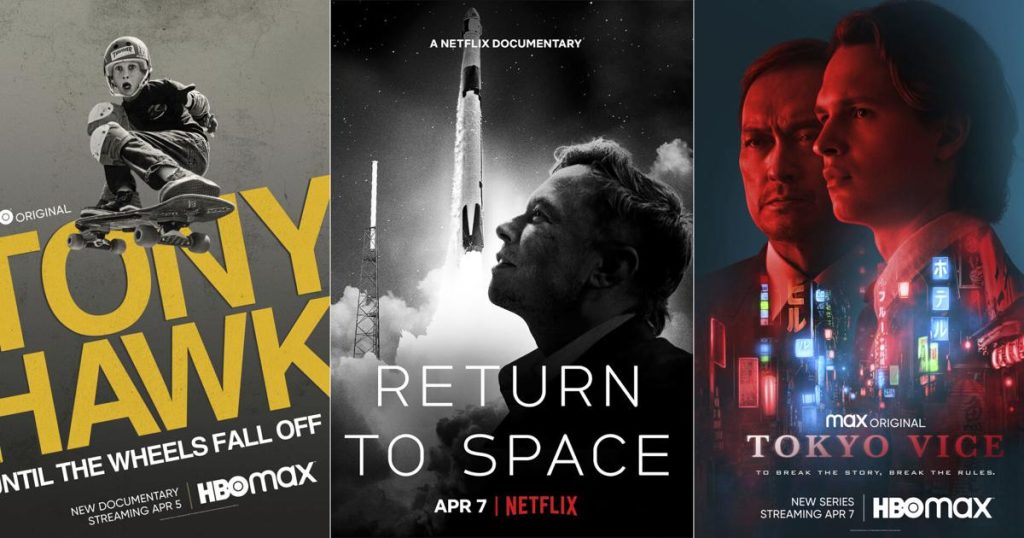 An Associated Press curated list of what’s to come for US streaming services, music, film, and television platforms. Dates may vary in other countries.

Tony Hawk may not seem like the most visible presenter at the Oscars, but he has a new movie on the way. “Tony Hawk: Until the Wheels Fall,” a documentary about the life of a professional skateboarder, premieres Tuesday on HBO Max and HBO. It was directed by Sam Jones, who made the 2002 documentary about rock band Wilco and covers the entire career of the 53-year-old skateboarder, while also trying to review whether his obsession is still as strong as it was. always. “Tony rivals Tony,” says co-star Lance Mountain in the film. “He’s always competed against Tony.”

Andrea Arnold, British director of American Honey and Fish Tank, is one of the brightest filmmakers working today. In “Cow,” which hits theaters and digital rental Friday, he makes his first documentary with an unexpected star: Luma, a dairy cow on a farm in southern England. Arnold filmed “Cow” over a period of four years, depicting the daily rhythms of Loma’s life, giving the animal the attention and sympathy he would have given any human hero. Along with films like 2021’s Gonda, a black and white documentary about a pig, “Cow” is part of a recent trend of using film to depict and uplift the lives of animals that are rarely shown in movies.

Filmmakers Elizabeth Chai Vasarhelyi and Jimmy Chin, who directed the Academy Award-winning “Free Solo” and the documentary “Rescue,” now have their sights set on “Returning to Space” (“Returning to Space”). The documentary, which premieres on Netflix on Friday, is about Elon Musk’s company SpaceX and its attempt to transform space travel.

Camila Cabello, last year’s Cinderella, will be showing Magical Music for the first time this week. Their third album, Familia, will be released on Friday, April 8th. The three-Grammy nominee has given a sneak peek into her new music by collaborating once again with Ed Sheeran for the salsa song “Bam Bam.” Cabello also released the album’s song “Oh Na Na” featuring Myke Towers, and the single, “Don’t Go yet”. A day before the album debuts, she will perform some songs live at the TikTok concert: “Familia: Welcome to the Family,” which will air at 7 p.m. New York time (2200 GMT) on Capello’s TikTok channel.

Jack White has not one but two albums on the way for 2022, the first of which is “Fear of Dawn,” due out on Friday, April 8, and featuring a song featuring distorted guitars, powerful drums and sound effects. One of his sneak peeks is “Hi-De-Ho,” his cool and whimsical collaboration with A Tribe Called Quest Frontman Q-Tip, which mixes rock and electronic swings and has a shout-out to Jasmine Cab Calloway. White’s second album, Entering Heaven Alive, will be released on July 22. To prepare for this album, listen to the single “Queen of the Bees”.

Many believe they know Benjamin Franklin: a diplomat, a fan of kites, a thinker. In his two-part, four-hour documentary, Benjamin Franklin, Ken Burns delves into the life and work of the American founding father who lived through a remarkable period of social, political, and scientific change that he helped drive. Franklin even set the standard for futuristic humorists like Mark Twain, according to the documentary directed by Burns and written by Dayton Duncan, who has worked on projects like Country Music and National Parks. Mandy Patinkin provides the voice of Franklin in the film, which will air Monday, April 4 and Tuesday, April 5 on PBS.

Ansel Elgort and Ken Watanabe star in “Tokyo Vice,” an HBO Max thriller described as “unsealed” inspired by Jake Adelstein’s 2009 memoir “Tokyo Vice: An American Reporter on Police Beat in Japan.” Elgort plays Edelstein, set in 1990s Tokyo, “where nothing and nobody really is,” as HBO curiously puts it. The series was filmed in Tokyo so it’s an adventure that can be enjoyed from the sofa. Created and written by Tony Award-winning playwright JT Rogers (“Oslo”), “Tokyo Vice” will air the first three episodes on the streaming service Thursday, April 7, and two more every Thursday, through the end of April 28.

Celebrities are trying to fool themselves with stories that may not be true in “Am I lying to you?” The CW is based on the hit British series of the same name. Actor, writer and comedian Asif Mandvi (“Evil”) hosts the series, which premieres on Saturday, April 9th, with Matt Walsh (“Veep”) and Canadian comedian Sabrina Glees as captain of the opposing team. The season’s guests are: Brooke Shields, Laura Benanti and Preet Bharara, a former US attorney for the Southern District of New York.