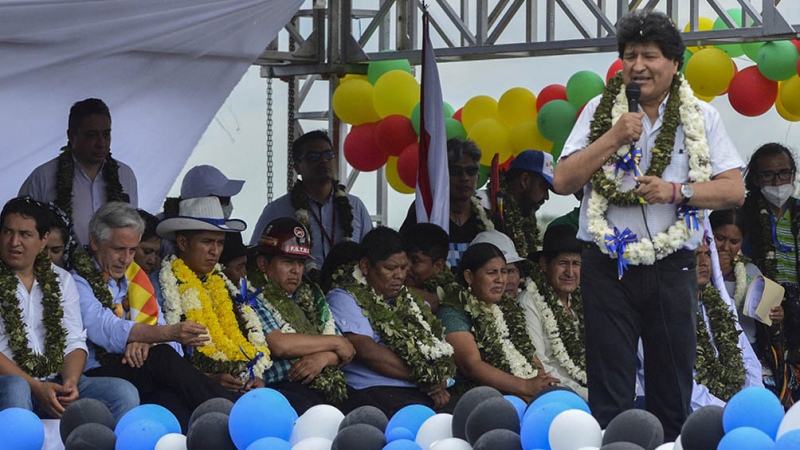 Its name consists of the conjugation of the word Quechua (man) and the abbreviation Unasur, which is why it epitomizes the Unasur idea of ​​man and peoples.

Former Bolivian President Evo Morales announced this week the launch of Runasur, an alternative forum for the Union of South American Nations (Unasur), which aims to forge a multinational America in coordination with social movements in Latin America.

Representatives from Bolivia, Venezuela, Ecuador, Peru and Argentina, who make up the Forum’s technical team, met in recent days in Cochabamba to set guidelines and give an initial push to the new space for regional integration.

Its name was formed from the conjunction of the word Quechua (man) and the abbreviation Unasur, which is why it epitomizes the Unasur idea of ​​man and peoples, according to its promoters at a time when Unasur is still in an institutional coma with a strong split between the governments of the region.

Morales put forward the idea of ​​this new space for regional integration one day after their return to Bolivia, after a year of exile, at which time the former president took advantage of the visit of international delegations and launched the proposal that was then. It has been described as an “indigenous unasur”.

He suggested that “Ronasor has a goal, which is to unite social movements – whether indigenous people, workers, middle class and educators – with educated professionals and the goal is to fight for a true liberation of a multinational America from peoples to peoples,” Morales explained in the results of his first meeting. Last Saturday, the technical team consisted of Bolivia, Venezuela, Ecuador and Argentina.

“A plurinational America is incompatible with capitalism and imperialism,” Morales added, along with the group that defined the organization’s governing principles and on Saturday established its organic structure.

In this regard, the President of the Union of Indigenous Nationalities in Ecuador (Connie), Jaime Vargas, explained that “the House of Representatives is the highest authority in the body and is formed in the operational part, which is the Executive Council.”

The following councils are divided into the Executive Council: the Council of the Political System, the Council of Education, the Legal Council and the Economic Council, Mou`id Vargas.

He also clarified that the Council of Representatives – the highest level of deliberation and decision-making in the forum – would consist of representatives of social organizations and indigenous peoples from different countries.

Runasur will be headquartered in Bolivia and have four branch offices in the Northern, Southern, Eastern and Western regions, according to Kawsachun Coca Radio.

The goal is to integrate 12 countries into the region, so the Bolivian side has already committed itself to contacting and reporting social organizations in Peru and Paraguay.

Argentina will do the same with Brazil and Uruguay; Ecuador will take care of Colombia and Chile; And Venezuela from Suriname and Guyana.

Its constitution stipulated that Ronasur is an anti-colonial, anti-imperialist, anti-capitalist, integral, sovereign, and articulate body. In its first decision entitled “Defense of Life and Health”, it called for the issuance of patents for a vaccine against Covid-19 to ensure that it is free of charge.

“The forum is still in primitive condition. We had the first meeting in December with social organizations and indigenous peoples from all over the continent. Then we had virtual meetings,” said Assistant Secretary of Central de Trapagadores de la Argentina (CTA) and Secretary General of ATE, Hugo Godoy, One of those who participated in the first live technical team meeting was held last weekend in Villa Tonari, Cochabamba.

Godoy explained that Runasur would demand the re-creation of Unasur and the strengthening of the community of Latin American and Caribbean nations (Celac).

“We will build in Latin America and the Caribbean the great homeland, the multinational America that we encourage” because the new institutions of the governments of our countries are necessary without the intervention of the United States, and that ministry of the colonies, which is the Organization of American States headed by the coup leader (Louis) Almagro, does not enter.

The unity of social, indigenous and trade union movements

The Runasur project seeks an integration that transcends the political situation and strengthens the unity of social, civil and trade union movements in Latin America that aspire to a common goal: the political, economic and cultural sovereignty of peoples.

Morales explained at the meeting in Cochabamba that this space of integration is an alternative to Unasur, and accused “right-wing governments” in the region of “crushing” that regional organization.

Onasur emerged in 2008 with the signing of the Constitutive Treaty, which entered into force in 2011 and originally consisted of Argentina, Bolivia, Brazil, Colombia, Chile, Ecuador, Guyana, Paraguay, Peru, Suriname, Uruguay and Venezuela.

However, changes in the political label of the governments of the Indian subcontinent mean that in April 2018, Argentina, Brazil, Chile, Colombia, Peru, Colombia and Paraguay announced the suspension of their participation in this bloc. In 2019, Ecuador joined this exit and in 2020, Uruguay joined.

Today, the regional scenario has changed slightly, and in 2020, Venezuela committed to relaunching Unasur this year, a promise that has yet to be fulfilled, despite its sharing between the governments of Argentina and Bolivia.