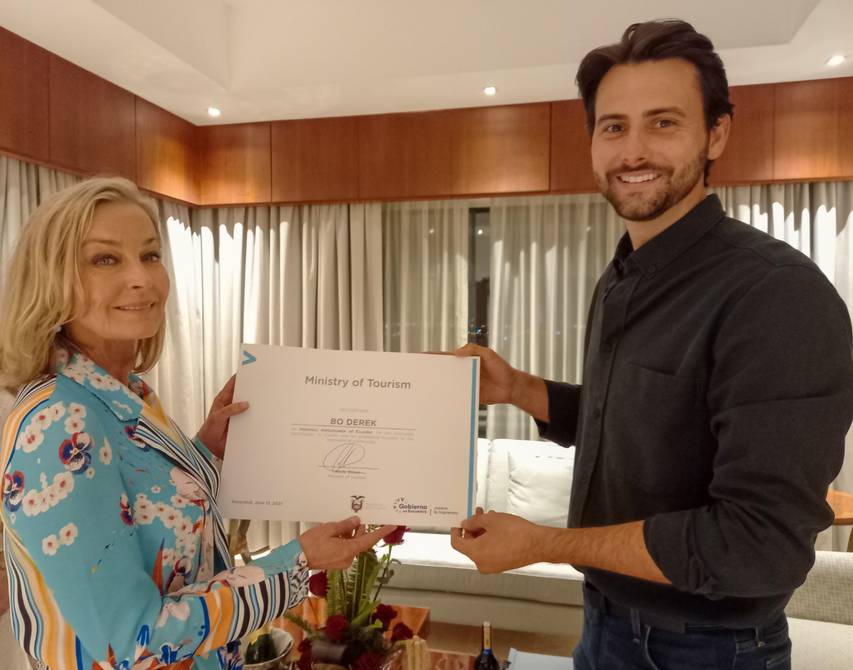 The famous American actress has been working on environmental issues for 20 years with the current Ambassador of Ecuador to the United States, Yvonne Baki.

Protagonist of films like 10, The Perfect Woman, Orca, Fantasies, Changing Seasons, Tarzan the Monkey Man and Bolero, American actress Bo Derek has been appointed as a tourism ambassador for Ecuador, in recognition of her contribution to spreading the country’s tourism benefits on an international scale.

The appointment was handed over by the Minister of Tourism, Nils Olsen.

Derek who gained fame in 1979 with 10, the ideal woman; For which she was nominated for a Golden Globe Awards, she met Olsen in Guayaquil. During the meeting, the Ecuadorean ambassador to the United States, Yvonne Baki, with whom she has a long-standing friendship, was present. In fact, in the times when she visited the country at the invitation of Baki, they worked together on environmental issues for 20 years.

The actress, who belongs to the Galapagos Islands Conservation Foundation, is known for her support of several environmental campaigns on the islands, which is why the document highlights “The invaluable contribution he made to tourism and the promotion of Ecuador in the international community“.

Actors endorse the commitment to preserve the Galapagos Islands

The appointment of the Tourism Ambassador was given within the framework of the Galapagos Revitalization Month, and it was an opportunity to announce the promotion Breathe again / Breathe again, which invites travelers to visit the Galapagos Islands, an open destination filled with nature and sustainability.