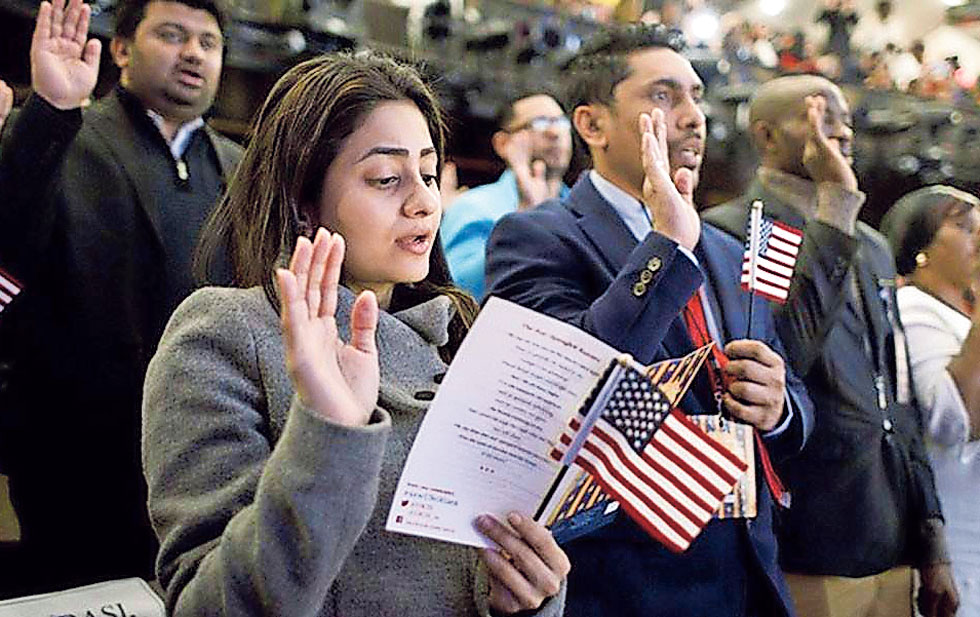 US Citizenship and Immigration Services (USCIS) reported that President Joe Biden yesterday reversed changes made by former President Donald Trump to the naturalization test, which took effect on December 1, 2020.

The new change will be implemented from March 1.

The announcement caused the approval and confidence of the immigrant community in this city who were discouraged from taking the exam, which was prepared in a complex and more comprehensive format compared to the previous one in use since 2008.

“I am happy because I think I will now dare to take the test,” said Maria Aguirre, who has already given up and made the decision to set her date until she turns 60 to take the exam in Spanish.

Likewise, thousands of legal residents who meet the civil exam requirements have embraced the same idea.

On December 1, 2020, USCIS implemented a revised civil naturalization test (Civic Education Test 2020) as part of the review and update process for the decennial exam.

Despite this, Trump’s anti-immigration policy was imposed during his administration and entered into force despite the torrent of criticism from various organizations in defense of immigrants and Democratic representatives.

Nearly three months after its implementation, the Department of Homeland Security said in a press release that it would reuse the 2008 version of the Civic Awareness portion of the exam, which includes basic questions about American history and the structure of government.

“This measure aligns with the framework for the Executive Order on Restoring Confidence in Our Legal Immigration Systems, which directs a comprehensive review of the naturalization process to remove barriers and make the process accessible to all eligible individuals,” USCIS released.

USCIS argued in its argument that “the 2008 Civic Education Exam was carefully developed over several years with input from more than 150 organizations, including ESL experts, educators, and historians, and was tested. Before implementation.” The agency added that the aim is to make the process “as accessible as possible.”

“The will is in the desire to add to the immigrant community, not to confront it,” said Raoul Garcia, a resident of the eastern part of the city.

According to the press release, if applicants submit their documents outside the specified dates, USCIS will give them the option to take the 2008 version of the test or the 2020 version, if your naturalization interviews are scheduled before April 19, 2021.

If your naturalization interviews are scheduled for April 19, 2021 or later, you will receive the 2008 version of the test regardless of when you applied.

See also  Hong Kong plans to get rid of millions of Covid vaccines; Residents don't want to take them

Since the announcement of the naturalization test change initiative promoted by the previous administration, critics of Trump’s proposal have indicated that it contained conservative biases, by focusing on historical documents such as federal papers and reducing questions about the civil rights movement and women’s suffrage.

The statement said that the test is applied to those seeking to obtain US citizenship by naturalization, “and it is one of the legal requirements” to achieve this.

The agency stated that both tests will be presented in the transitional period and that the 2020 exam will be permanently canceled by April 19, 2021 for those who take the exam for the first time.