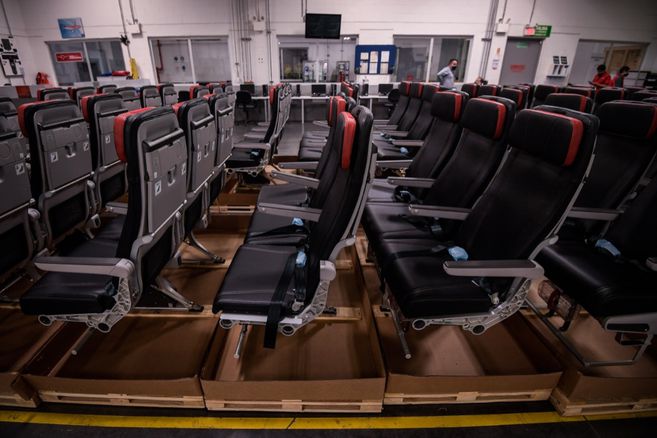 At Avianca’s Maintenance and Repair Center in Rionegro, the airline has introduced a reconfiguration of its fleet.

After exiting US Bankruptcy Law (Chapter 11), Avianca has presented its 2021 balance sheet and forecast for the next year. He emphasized that it would not be a low-cost airline but would rather have single features such as “flexible” products and “competitive fares”.

We suggest: Avianca is out of the bankruptcy law process. What’s next for the airline?

Although stating that it will not “move”, it maintains that the company will change its address to the UK, as defined at the end of the US business reorganization process, given that there are “recognized rules and decisions of operation and Chapter 11 compliance”.

Regarding prices, he stressed that “as soon as we finish reconfiguring the aircraft and implement other strategic projects, the lower prices will be fixed.” He added that “the long-range flights will remain” and that they will continue on its planes. Dreamliner. Similarly, he emphasized that VIP halls.

He added that Lifemiles and Avianca Cargo would be among the “strategic” businesses that he would seek to promote.

Among its goals for the coming year are the implementation of a non-stop “point-to-point” network project and fleet simplification. In addition to the lower prices, he will reconfigure the cabins so that more seating is available.

Regarding the latter, he explained that a team of more than 100 experts in Rionegro, Antioquia, “will install more than 14,000 new seats of three types (Economy, Plus and Premium) in more than 90 Airbus A320 aircraft serving short and medium-range routes. Via network. This project will allow for a 20% increase in capacity per aircraft to offer the most competitive rates.”

You may be interested in: In pictures: This is how the Avianca reconfiguration works

This plan began in October 2021 and will run until the end of 2022. “Avianca is committed to investing more than $200 million in this project,” he said.

In terms of service, where there are 849 agents currently in customer service, it refers to “enhance service channels”. He says he will achieve this through investments that “will gradually improve through 2022.”

In the new roads, he indicated that in 2022 he will open 16 new lanes Across your entire network, like this:

Or Cali to Cancun, Mexico City, San Jose and Quito.

Or Bucaramanga to: Miami.

· Between Ecuador and the United States:

Or Guayaquil to Miami.

· Between El Salvador and the United States:

· Between Costa Rica and Nicaragua: