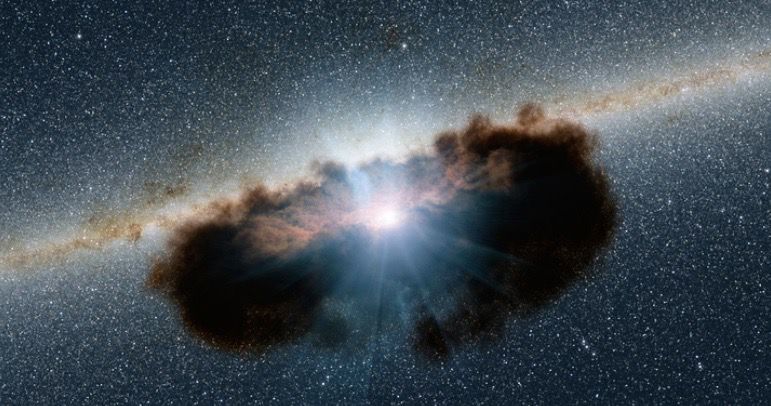 largest population supermassive black holes In the near or local universe – giant ones that grow and devour everything in the active cores of galaxies and are up to billions of times the mass of our sun – have been revealed by the international scientific team of the project bass scanafter more than 15 years of research including great participation by astronomers and astronomers from the Center for Astrophysics and Related Technologies (CATA), from Chile.

The research, published in the latest issue of The Astrophysical Journal, includes a series of scientific publications that have used data from large telescopes in the north of our country, the United States, and NASA’s Rapid Space Observatory, creating a large backlog of information. This made it possible to build a map of these active black holes and their intense emissions in the nearby universe.

According to research, when a large amount of dust and gas surrounds a supermassive black hole, it can form an accretion disk that emits large amounts of light across the electromagnetic spectrum, peaking in the optical and ultraviolet range, in
Because it falls into a black hole.

This same dust and gas, however, can also obscure our view of the so-called central drive, or nucleus, explains Franz Bauer, a CATA researcher and academic at the Institute of Astrophysics of the Catholic University, who was also involved in the research.
“Active” galaxies (AGN), which makes it difficult to observe these giants with conventional tools and techniques.

“This means that although many supermassive black holes are actively accumulating material and growing, we do not easily see it at optical wavelengths and do not take it into account,” he adds. This barrier has been overcome thanks to the instrument on board the Swift Observatory known as BAT (Burst Alert Telescope), which is capable of detecting high-energy X-rays also known as “hard X-rays”, associated with high-energy emissions from supermassive black. holes.

“It’s similar to the process of taking X-rays, in that this instrument is looking at a similar frequency. In this case, it would be like cosmic X-rays observing the nuclei of galaxies where these growing black holes are located,” explains Ezequiel Trester, deputy director of CATA and an astronomer at the Catholic University. in Chile, which was also part of the research.

Claudio Ricci points out that at these energy levels, the radiation interacts very little with matter in its path, allowing “also to detect some of the darkest black holes. This has allowed us to obtain a nearly complete sample of black holes in the accretion (growth) stage of Nearby galactic centers,” explains the researcher. The speed at which these black holes grow varies greatly – the astronomer adds – from the equivalent of the mass of Uranus per year, to those that “swallow” the equivalent of 30 Jupiter planets in a similar period.

In addition to the Swift and BAT observatory, more than 10 ground-based optical and infrared telescopes have been used in our country (Chile) and other parts of the world. Ezequiel Treister highlights that it is “a collaborative work that requires the joint work of telescopes in the southern and northern hemispheres, in order to study the active cores of galaxies distributed throughout the sky. Mass measurements were possible thanks to the many observations made from the Chilean desert.”

One of the results published in this study, led by Shelley, was obtained using infrared spectroscopy to measure the mass of more than 300 supermassive and extremely dark black holes. Thanks to this data, we were able to measure the mass of black holes, detect the motion of clouds that rotate at high speed in their surroundings, including completely obscured systems where this was not possible. This illustrates the importance of combining several observatories,” says Dr Federica Ricci, who was a postdoctoral researcher in FONDECYT at the Catholic University and is currently continuing her research career in Italy.