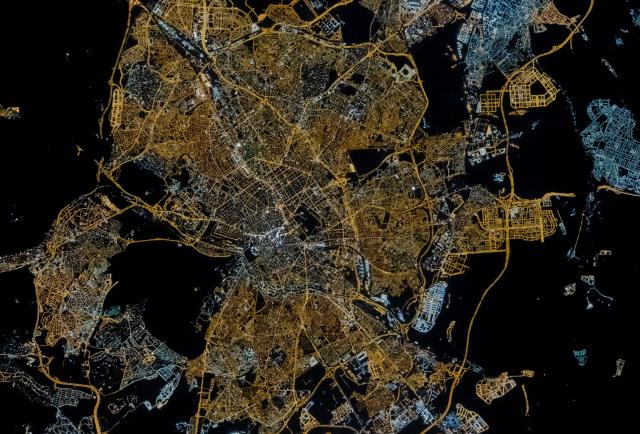 the Pictures that an astronaut takes when in space with a digital camera commercial It can be up to 300 times more powerful, thus also useful for one use scientific, from those obtained by the advanced devices of some satellites.

A group of researchers from the Complutense Universities of Madrid, Santiago de Compostela (Galicia, northwest), Exeter (UK) and Barcelona have designed a photometric system that allows images taken by astronauts with commercial digital cameras to be converted into scientific images.Project Emissi @ n“.

the Complutense University of Madrid He explained in a note released Thursday that when studying light pollution, the color information in astronaut photos is “unique and important” for understanding and tracking the environmental impact of lights at night.

With new stellar catalogs published, cameras such as those used by astronauts on the International Space Station can be calibrated, Complutense noted, and the same procedure is useful for night images taken by professional photographers and other researchers from light pollution And for people outside the scientific field.

The Citizen Science Program “Cities at Night” was launched in order to facilitate access to the night images obtained by astronauts from the International Space Station, and to this initiative was added the “Azotia” light pollution project, Complutense University in custody.

“Azotea” is part of the European project “Action”, which, according to the Complutense University of Spain, aims to change the way citizen sciences are practiced, making use of the observations and footage of volunteers, obtained with their digital cameras. , to determine the contribution From human activity to the brightening of the night sky.

Wally Funk, an 82-year-old pilot, will travel with Jeff Bezos into space

Complutense astronomer Nicholas Cardel noted that these initiatives can help make citizen science a reality in the field of astronomy, and contribute to an increased public interest and understanding of science.

the teacher Jaime Zamorano Note, in the same note from Complutense University, that scientific devices are usually very expensive and limited to a few researchers, and highlighted that interested people can now use their own cameras to obtain calibrated scientific images of great interest in field of astronomy and light pollution.

For astrophysicist Alejandro Sanchez University, “It is as if we have just received a new satellite out of nowhere, which will give a new dimension to the field of night remote sensing and will test the higher transfer of knowledge from astrophysics to other fields.”

See also  The first text message in history was auctioned for €107,000