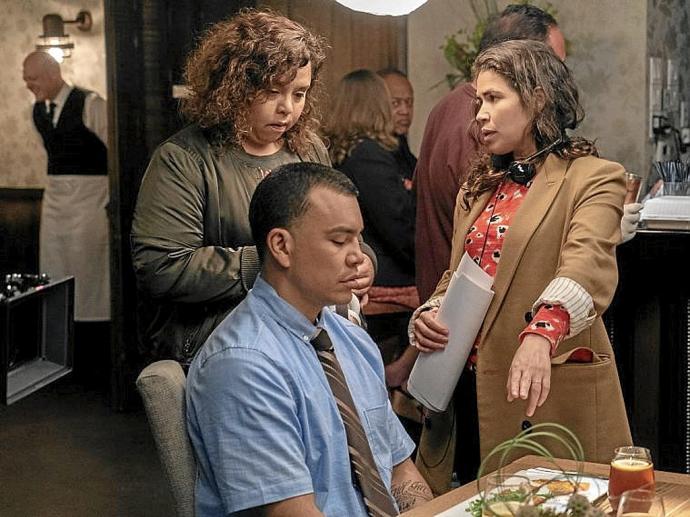 Angels America Ferrera and Netflix reopen doors Gentified, the acclaimed series about a Latino neighborhood threatened by regeneration that continues in its second season exploring issues such as immigration, intergenerational conflict, identity and inequality.

Producer, director of some of the seasons, and promoter of this project since its inception, Ferreira spoke with Efe about how they handled the new episodes, which will premiere Wednesday after the success of the first season. “It’s interesting. I think what we all felt was emotion and also the freedom to really get through the first season, where you set everything up and just want things to go,” he explained.

He added, “Thank goodness we found our audience, people loved the show, the cast was great and all the pieces fit together. A second season took off that burden of proving our worth to delve deeper into the issues.” Consolidated as one of the most listened-to Latin voices in Hollywood not only because of her impressive career as an actress, Ferreira announced that in these new chapters she searched for “opportunities” and “nuances” to enrich the history of Gentified.

It is located in Boyle Heights, an iconic neighborhood considered the center of Chicano culture and activity in Los Angeles, Gentified It tells the daily life of a Latino family who owns a humble Mexican restaurant. In this season, the main characters return with their own dilemmas, for which the renewal of the neighborhood serves as a backdrop. Patriarch Bob (Joaquín Cosio) continues paperwork’s legal troubles and continues to clash with young and combative Anna (Carrie Martin), the talented Chris (Carlos Santos) still not knowing what to do with his life and his business prowess. The kitchen, and Eric (JJ Soria) must face a decision that could keep him from his community forever. The multifaceted Latin representation of Gentified, which follows in the footsteps of very interesting Latin series such as life (2018-2020), spanning the season as they emerge from aspiring Hispanic lawyers to young chefs of Oaxacan descent.

Linda Yvette Chavez, co-creator of Gentified Along with Marvin Lemos, he insisted that deviating from the beaten path describing Latinos is key to this series’ DNA. “All Latinos are complex and very complex,” he said. He pointed out that in Gentified They take “every opportunity” they find in their plots to display “characters of many layers. We are desperate to look for that. If we have the power to make it happen, we see those kinds of images on screen, why not do it”, he claimed.

Pride and Dignity One of the season’s most shocking moments will come in Chapter One, when Bob, in a remarkable gesture of pride and poise, assumes his place as an undocumented person and justifies his humanity in the face of any kind of discrimination. Ferreira, who directed that episode and is a major immigrant rights activist, defended that moments like these are a tribute to different generations of Latinos. “Not many of us have seen our mothers, fathers and grandfathers on screen in all their complexities,” the Honduran American contrasted. “Now it is up to us to represent the generations that preceded us in the way they deserve. The word that always comes to mind is dignity,” he said. Ferreira also did not forget to pay tribute to the “enormous talent” of Joaquin Cousio, a veteran actor in the cast who was distinguished by his quality and youth. “You don’t really have to direct Joaquin: he’s a brilliant actor,” he concluded.