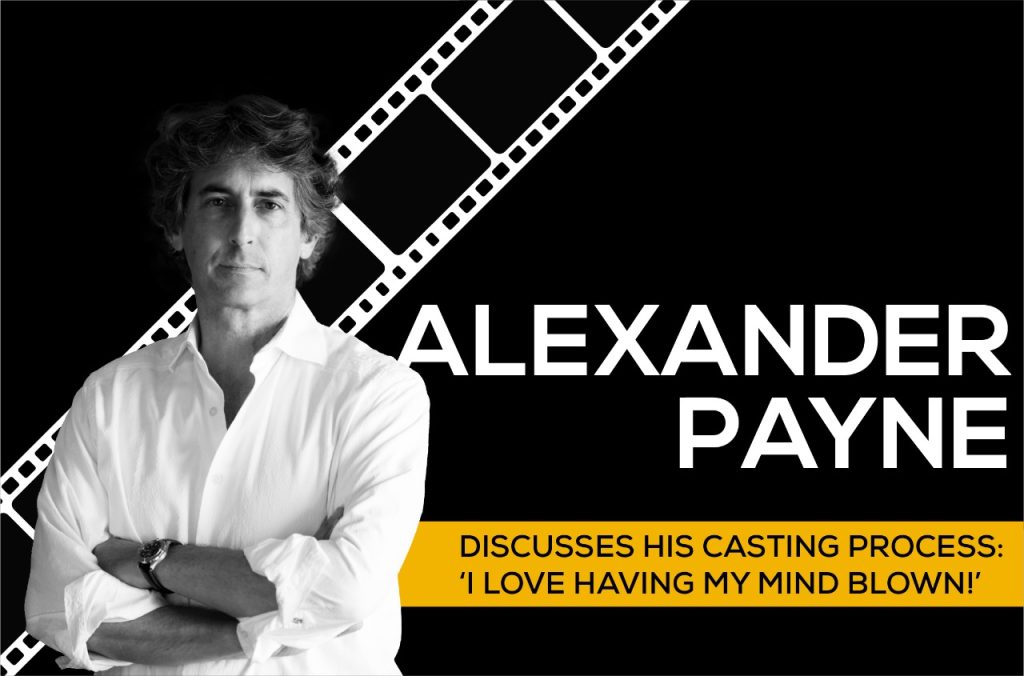 Like many directors, Alexander Payne makes movies on his own terms to realize his vision. He can find the heart in any situation, making for memorable dark comedy. And he has a way of making audiences invest in his average, everyman characters, no matter if the role is being played by an unknown actor or a Hollywood heavyweight. Payne accomplishes this primarily through what he says are the two key components of feature filmmaking — screenplay and casting.

“In casting, I like to audition. I like actors to come in and read the words aloud. I want to meet them and talk about it, you know. Feel each other out a little. I don’t expect a performance, but it helps to hear actors say the words,” says Payne. And he doesn’t go it alone. “I have a great casting director,” he says. Payne regularly works with casting director John Jackson and says, “I give myself few compliments in filmmaking, but I think I cast well.”

According to Payne, the two look for actors who are “funny, dramatic, and surprising. Everything comes down to that.” The director doesn’t tend to play favorites; everyone from A-list celebrities to unknown extras must pass the auditioning process. “Come one, come all. I don’t watch a lot of contemporary movies or TV shows, so I rely on casting to tell me who is out there,” he explains. “I have only a vague idea of who the character might be in my head while writing, so I love having my mind blown by meeting disparate flesh-and-blood possibilities.”

“I’m trying to orchestrate the movie that I myself would want to see. That’s my job. On the set, when the actors are doing it in front of the camera, I’m watching them, and it’s as though it’s being projected on a movie screen in my brain,” explains the Nebraska-born filmmaker. “Everybody has his or her own niche on set — the actors, all the technicians and artists — but I’m the only one who is sitting in the movie theater, popcorn in hand, watching the movie.” As he’s watching the scenes live on set, he says he’s thinking “it should be a little bit more to the left. No, that’s a little slow; it should be a little faster.”

See also  The difficulty of obtaining a luxurious men's watch

What can an actor do to catch his eye while casting? “I am impressed by how quickly and effectively an actor can communicate what needs to be communicated. A movie needs to be zippy. Film is a constant search for economy, so you want actors to act convincingly and efficiently,” explains Payne.

“I’ve been very fortunate to work with excellent actors in my career,” says Payne. He admits to taking a risk that paid off when he cast Hong Chau in 2017’s Downsizing. “She steals the movie. We knew it when we were shooting,” recalls Alexander Payne. He was exceptionally impressed with how Chau handled herself during one particular scene. “It was a fairly long close-up [during] take one. I could never do something like that, not with all the lights and burly men with walkie-talkies around you, and the unblinking Cyclops of the camera right in your grill,” explains Payne. “She nailed it.”

Payne says there’s a delicate balance between hiring relatively unknown talent and A-list actors in order to procure funding. “Depending on the budget of the film, you often need someone who is an actor and also a star,” explains Payne. “The problem that arises is that many current A-list film stars don’t look like people to me. They look too much like movie stars.” Payne says he cast Matthew Lillard after only one audition for 2011’s The Descendants because “I needed someone who looked like someone I might go to high school with. I’m grateful he said yes.” Lillard was equally appreciative to land the part. “To speak to the talent of Alexander Payne real quick: This is a movie about a guy, his wife is dying, he’s left with two kids, and [he’s dealing with] Indigenous land rights in Hawaii. There’s not a studio in the world that would make that, except for Fox Searchlight. And Alexander made it so that it’s funny and touching,” Lillard said.

See also  Spain is once again looking like a 'red zone' in the UK. travel agencies news, rss1

Of course, he also cast A-lister George Clooney as the cuckolded husband in that film. “I really dig him as an actor and a star — he’s so appealing and so interesting in what he does. Look at the range he’s got,” says Payne. He points out that Clooney excels at comic parts like his role in O Brother, Where Art Thou?, just as much as when he’s being serious, like in Michael Clayton or charming audiences in the Ocean’s movies. “He’s always good; you always want to look at him,” says Alexander Payne. “People told me, ‘A half an hour into the film, I’m able to forget it’s Clooney. He seems so everymanish.’”

“The pressure I have is internal, to make what I think is a good film. The person whose opinion I’m most interested in is my own, in a way. I’m at once humble enough and pretentious enough to say that I’m looking forward to making something really good in the future,” shares Payne. “These are fine little films that I feel I’m still cutting my teeth on and learning how to make a film and what a film is. I hope one day I can make one really good one.”

He’s currently working on The Holdovers, which filmed in Massachusetts in early 2022, and shows no signs of slowing down. “Not only do I never want to retire, but I still feel as though I’m just getting started. I’m always going to want to make films, and I want my films to be good, whatever that means,” says Payne. “And I hope I can be as influential to others one day as my mentors were to me.”

See also  They discover a vast graveyard of sea creatures with a "supernatural" aspect in the United Kingdom, described as 'Jurassic Pompeii' (photo).