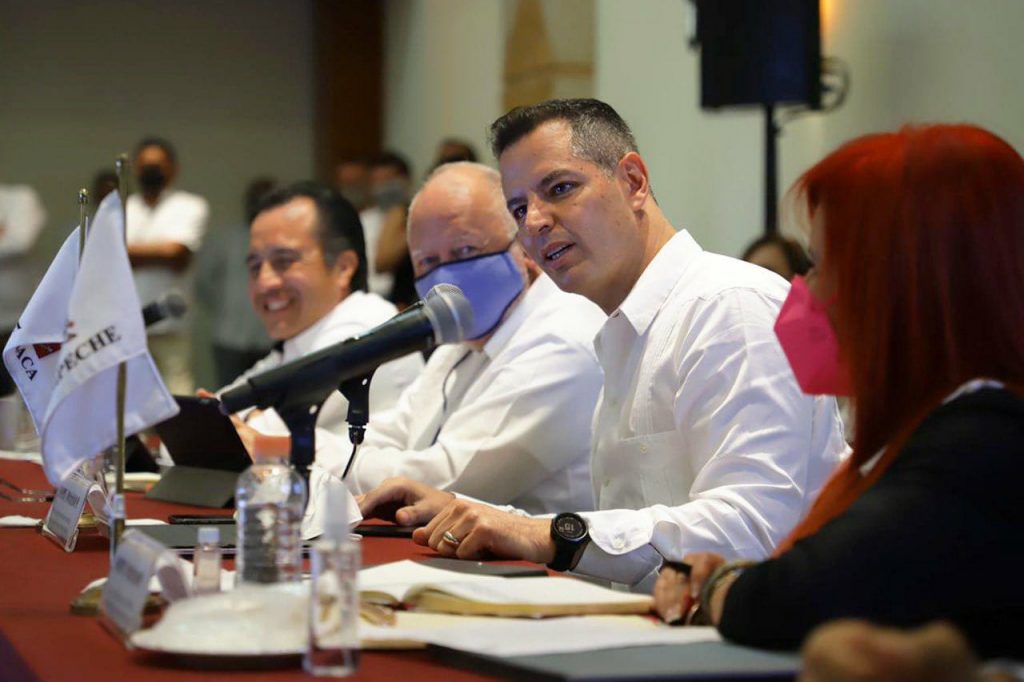 Villahermosa Tabasco. October 20, 2021. – Governor Alejandro Murad Hinojosa presented a panorama of the state and the challenges facing Oaxaca in the area of ​​economic development, in the framework of the Governors Meeting of the Southeastern States of Mexico, which was attended by the US ambassador to North America in Mexico, Hon. Mr. Kenneth Lee Salazar and officials of the Government of Mexico.

Along with his counterparts from the states of Southeast Mexico, the President of Oaxacan expressed that to pay off the historical debts that for many years kept the Southeast in a state of desertion, his government has worked on strategies, actions, challenges and projects in favor of the development of Oaxaca, the environment, as well as attention to the current situation of immigration.

Among the strategic sectors with investment opportunities, Murat Hinojosa said that the entity has 92% of the national production of mezcal with a presence in 64 countries. In addition, in the mining sector it is among the top 10 producers nationwide and in tourism, Oaxaca receives 5.3 million visitors annually.

He also noted that the country in the energy sector is the leading country at the national level, with 2,756 megawatts produced in 28 wind farms. “We are the fourth national coffee producer, and of course, in terms of infrastructure and logistics, there is the Interoceanic Corridor of the Isthmus of Tehuantepec, which will become the largest logistics center in America.”

On the other hand, Murat Hinojosa announced that in addition to the inter-oceanic corridor, the state plan for infrastructure development envisages in 2022 the completion of the highways Mitla – Tehuantepec, Barranca Larga – Ventanilla and Akukan – La Ventosa; As well as the modernization of ports, railways and the Internet, which enhances the competitiveness of the region.

The governor emphasized that Oaxaca is recognized nationally and internationally as one of the most beautiful and diverse destinations in Mexico, having been honored with multiple awards. “We have worked so that the entity has sufficient connection with the airports, and this guarantees more tourism, which at the same time means more work and economic benefits,” he stressed.

In his speech, the governor of Tabasco, Carlos Manuel Merino Campos, emphasized that this meeting took place with the firm intention of building agreements for the benefit of the entire southeast of Mexico. “We meet to work as a team with open dialogue to advance ideas, through harmony and shared responsibility,” he explained.