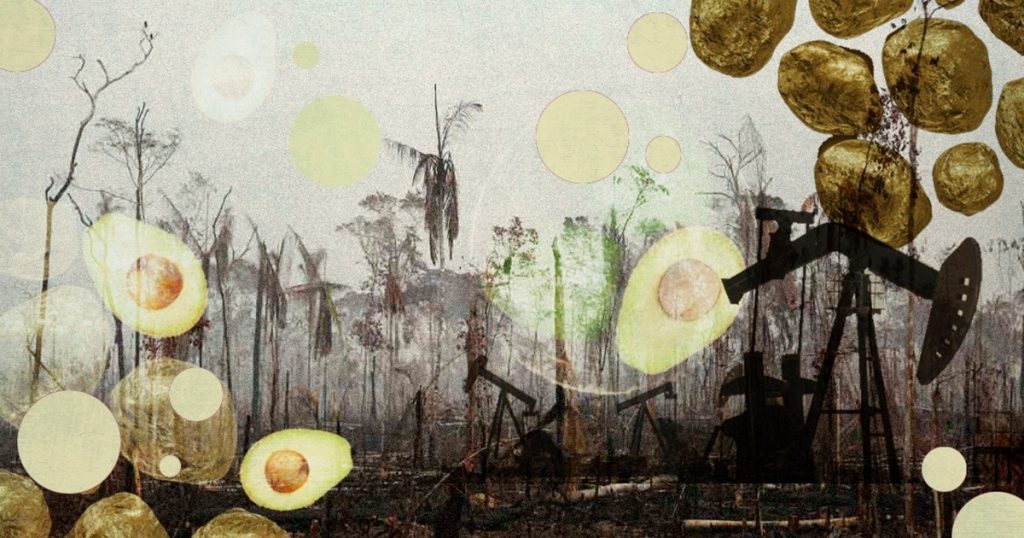 “If they don’t listen to us, there will be no future for them or anyone,” he said. Jyro saw, Of the indigenous people of the Munduruku Brazilian ethnic group, when explaining the mission he would have undertaken to offices General Electric of California To explain to the company’s engineers the environmental consequences that building a hydropower plant on the Tapajos River in the heart of the Amazon rainforest could cause. The future: This is what is at stake, everyone’s existential dilemma, as the reporter describes Andy Robinson.

Gold, oil, and avocado. The New Open Veins of Latin America It is the title of Robinson’s new book, an economist he graduated from London School of Economics. The volume, which compiles various records on the expropriation and extraction of natural resources in Latin America, is a clear warning about the impacts that the dynamics of capitalist production and the neoliberal model of globalization have had on the environment. But above all, it is an urgent call to rethink the path, adjust it and find new ways to give sustainability to the future of humankind.

“Almost revolutionary change is needed to protect the planet and avert disaster. We need a revolt in defense of the planet and in defense of a more equitable distribution of income,” Robinson said in a phone interview from the Lavabés neighborhood of Madrid where he lives.

Robinson, Mobile reporter for the Catalan newspaper La VanguardiaHe is interested in Latin America as the laboratory where all economic theories have been applied and where all means and forms of production coexist. Before gold, oil, and avocados, Robinson published books Off the Road, Fear, Disgust, and Hope in America (2016) and reporter for Magic Mountain. How the Davos economic elite flooded the world (2013).

The gold, petroleum, and avocado records have a common thread between Robinson’s reading and rereading Latin American Open Veins, An article by Uruguayan writer Eduardo Galliano published in 1971 that characterized several generations of politicians, activists and leftists and provided a reading of the American subcontinent marked by exploitation and greed.

For Robinson, working with another writer’s past work atmosphere is nothing new. at Reporter in Magic Mountain It presents parallels between the bourgeois degeneration depicted by it Thomas Mann In 1924 and the recurring parties of the Davos Summit, held annually before World Economic Forum (WEF, for its English abbreviation). Robinson is a regular reporter on coverage of the World Economic Forum. at Out of the wayRobinson practices gonzo journalism, with vivid memories of his work Jack Kerouac Greetings Hunter S. Thompson.

Galliano is Robinson’s travel companion Gold, oil, and avocado, Divided into three main blocks of extractivism: minerals, food and energy. Together they travel to Salt Lake City, United States, to confirm the worship of gold in the Mormon capital, and to visit Potosi, to confirm among eastern tourists the evaporation of the dream of lithium as a tool for the industrialization of Bolivia. In Michoacan they witness the destruction of biodiversity and the formation of an illegal economy causing monocultures of avocados and in Honduras they document that banana republics are more powerful than ever. Publicly funded oil projects in Venezuela (PDVSA), Brazil (Petrobras(And Mexico)PemexIt helps them tell the story of the left implicated in the dilemma of establishing social assistance programs on oil rent.

I tried to do journalistic work away from urban centers, with an emphasis on extracting classic raw materials. So I spent a lot of time in the Andean highlands and the Amazon. And in the middle of my records, I allow myself to contemplate the rare tourism that occurs in Uyuni salt is flat, at Bolivia, Or home tourism in San Luis Potosi, Mexico, “said Robinson in the interview. Tourism, as a new form of extraction that causes environmental erosion with its large carbon footprint.” It is a new type of extraction, meaning that it can transform a public good such as the environment or the landscape. Natural or cultural heritage into a thing or a commodity. “

Robinson does not try to iterate or update Latin American Open Veins Galliano. For your book to subtitle this idea is the responsibility of editorial marketing, in this case Harp diffusers, A small, non-fictional home based in Barcelona. Indeed, in Gold, oil, and avocado The word Cuba did not appear once, and it is a nation and a basic concept for understanding the history of Latin America in the second half of the twentieth century.

“I never intended to write a book that would give it continuity Veins Galliano. Also because it can’t match his cool pen. It was a reference for a series of records that I put into an organized book on raw materials. Robinson said, “My is a factbook journalist.”

The records are, in my opinion, full of detail and raster notes, accurate and relevant interviews, calculated and enlightened ideas and subtle theoretical, historical and literary quotes that add immense value to the volume’s narrative. Above all, there are some urgent records to warn of an approaching climate devastation already causing migrations, famines, desertification and floods.

The formula for overcoming the existential challenge seems impossible: Moving towards a model of sustainability 1. Without overpopulation, 2. Without polluting, 3. Without depleting resources. Is this possible? Robinson replies, “We have no choice. This formula should be possible, because the alternative is the end of everything, so it should be possible. It will end up being so violent that we will need a political movement strong enough to change everything, but of course there is little.” Of the signs at this time of that political movement. It seems that we are moving in the other direction, which is very worrying. I do not know if I am a little anti-regime in this sense, because I think that almost revolutionary change is needed to protect the planet, and avert disaster.

We live in a boundary time between a possible world and an impossible world. If we continue that, we will all go to Hell in a straight line, ”writer Eduardo Galliano predicted in an interview with the Spanish SER Channel 15 years ago. The weather clock appears to be correct.