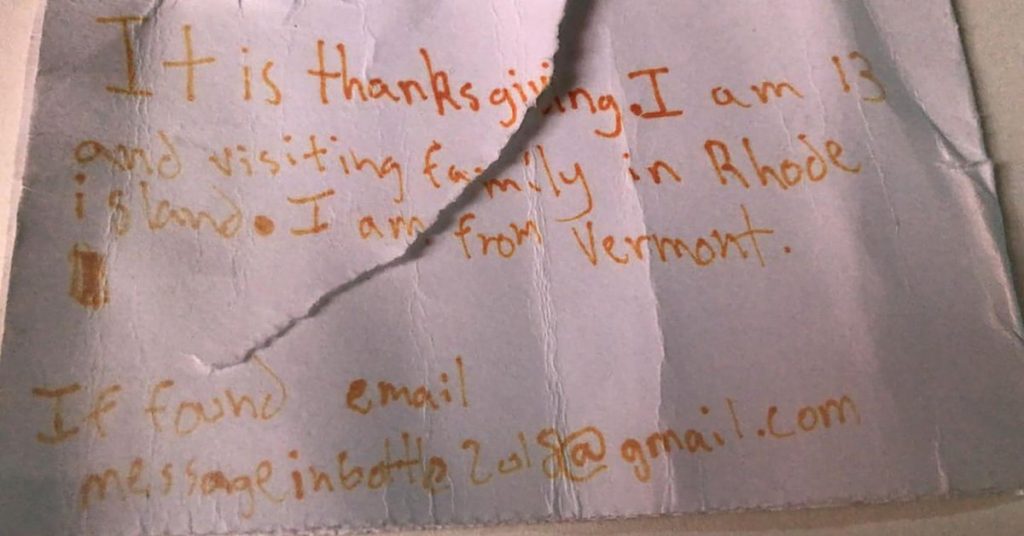 The message found in the bottle contains an email address that no one has yet responded to (Image: Facebook Molly Santos)

A young man from Portugal named Christian Santos I found a plastic bottle floating in the water while spearfishing in the Azores. Inside was a message, A note written by a Vermont teenager (USA) who traveled for nearly four years in the Atlantic Ocean to reach Portuguese waters.

The young man brought the bottle home and showed it to his mother, Molly, Who enthusiastically posted the picture of the message on Facebook He asks acquaintances to help him find the person who threw the bottle into the sea.

“If you know someone who lives in Vermont, ask them to share this so we can find this girl, it’s amazing how far she has come!!! “, Molly Santos wrote in her networks.

And yes that’s impressive ever since From Rhode Island, where the bottle was thrown in 2018, to the mid-Atlantic archipelago where 17-year-old Santos has found to be at least 2,400 miles, about 3,862 kilometers. Another strange detail of this story is that the Santos family lived in the United States, specifically in Boston, about 114 kilometers from where the bottle was left, but when Christian was only 5 years old, they moved to Portugal.

Christian Santos, 17, found the bottle with a note inside while fishing in the Azores archipelago in Portugal (Photo: Facebook Molly Santos)

The note, written in an orange marker on a well-kept index card, states: “It’s Thanksgiving. I am 13 years old and I am visiting my family in Rhode Island. I am from Vermont. If found, send an email to [email protected]“.

Speaking with local media, the young fisherman said that he likes to do it for fun and that he is considered very respectful of the environment.. On the day he found the bottle he was fishing with his cousin in the shallow waters of São Jorge Island, near a small town known as Faja João Dias.

When he saw the bottle in front of him, he picked it up to take it out of the sea. As he always did with other waste, plastic bags, papers, boat parts and ropes polluting the water.

The bottle that Christian Santos found at sea contained a message that it was released from Rhode Island (USA), about 3,862 kilometers from where it was found. Photo: Facebook Molly Santos

“I picked it up and looked inside and there was a piece of paper” said Santos, who took him ashore so as not to spoil the paper. “I thought it was fun and I went to show it to my mom.”

“What are the odds that someone from Portugal, who can actually read English, and understand what you’re saying will find it?”said the young man.

Molly Santos said on Facebook that she tried to send an email to the address listed in the note, but there was no response.

“I’d like to tell you that I found her, where she was, and what she was doing”, Christian Santos told WCVB News in Boston. “And we will be friends for life.” The author of the note will now be Omar Christian.

Today, Portugal is progressing towards a new phase of de-escalation, without Lisbon or Braga
A reporter’s friendship began 50 years ago with a letter found in a bottle by the sea
In Alaska they found a message in a bottle thrown into the sea by a captain in the Soviet Navy 50 years ago قبل