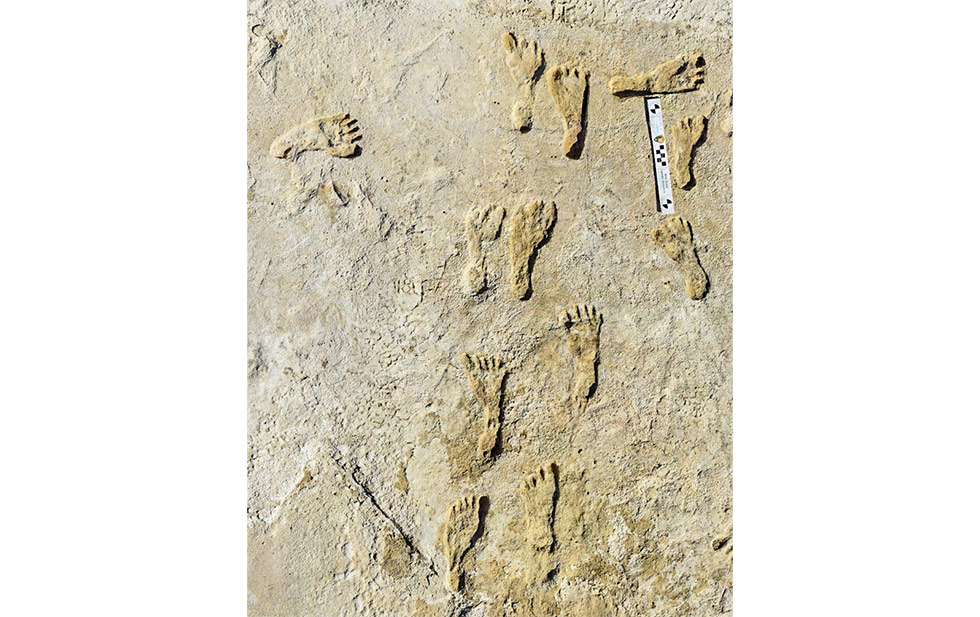 This discovery reveals evidence of humans having been in North America – specifically in the Tularosa Basin – at least 23,000 years ago, thousands of years earlier than previously thought.

The relics were found at the bottom of a dry lake in White Sands National Park, and were first seen in 2009 by a park administrator. Scientists from the US Geological Survey analyzed the seeds attached to the footprints to determine their approximate age, which ranges from 22,800 to 21,130 years.

Most scholars believe that the ancient migration occurred via a now submerged land bridge linking Asia to Alaska.

Based on various types of evidence — such as stone tools, fossil bones, and genetic analysis — other researchers have offered a range of possible dates that put humans on the American continent between 13,000 and 26,000 years ago or more.

The authors add that the current study provides a stronger basis for when humans were certainly in North America, although they could have arrived earlier.

Superintendent Mary Sutter said: “These amazing discoveries demonstrate that White Sands National Park is not only a world-class destination for recreation, it is also an outstanding scientific laboratory that has produced ground-breaking research.”

Fossilized human footprints were buried in multiple layers of sediment on a large beach in White Sands National Park. The seeds embedded in the footprints were radiocarbon dated and analyzed by the United States Geological Survey (USGS) to determine their age. The research significantly expands the coexistence of humans and megafauna in the Ice Age (Ice Age) and confirms that humans were present in North America before the great advance of glaciers at the height of the last Ice Age that closed migration routes from Asia. The results are detailed in an article published in the journal Science.

The researchers wrote that the fossilized footprints are indisputable evidence and stronger than “cultural artifacts, modified bones, or other traditional fossils.”

“What we are presenting here is evidence of a specific time and place,” they said.

Based on the size of the footprints, researchers believe that at least some of them were left by children and teenagers who lived during the last Ice Age.

White Sands National Park contains the world’s largest collection of fossilized footprints from the Ice Age (Ice Age) and has been recognized as a mega-site since 2014. In addition to human footprints, the footprints of the Colombian mammoth, saber, dire wolf and other animals have been discovered. ice Age.

Scientists from White Sands National Park, the National Park Service, the USGS, Bournemouth University, the University of Arizona, and Cornell University, collaborated with and consulted on the park’s Native American partners on this research.

White Sands National Park protects and preserves the world’s largest sand dune field, at least 23,000 years of adaptable archeology, flora and fauna, as well as historic buildings, with architecture that mimics those of the indigenous peoples, built during the Works Progress Administration era, Between 1939 and 1943.