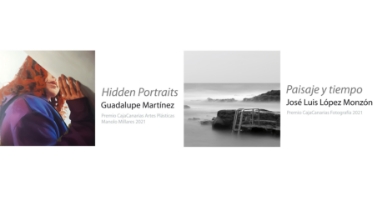 The promotion and dissemination of culture is one of the most deeply rooted commitments of the CajaCanarias Foundation throughout its centenary history, embodied by the implementation of many activities, among which the CajaCanarias Awards, which annually summon the creativity and talents that appear in our land.

Among all the forms of the CajaCanarias Awards are photography and plastic arts, which allow the winners of each edition, in addition to their own institutional recognition, to display their work in a joint exhibition. A modern call, marked by a wide participation, brought together works of different styles, techniques and languages.

Therefore, this exhibition reflects on the work of the winners of the “CajaCanarias Photography Prize”, José Luis Lopez Monzon, and the “Manolo Millares Prize for Fine Arts”, Guadalupe Martinez.

Both artists present a journey composed, in each case, of more than twenty works, among them those awarded by the jury in this edition, providing a personal view of the reality they encounter, like a small window into your inner world.

in the series hidden pictures Guadalupe Martínez offers important reflection on the concept of personal identity in today’s globalized and digital world. How we define ourselves and present ourselves as individuals in this technologically impersonal landscape that we experience is one of the ideas that is generating the greatest debate and interest today, as it contains all the questions and concepts that build the perception of the “me” with in relation to the “other”. Covering the faces of the characters he portrays, he reveals and highlights the reality of how the formulation of individual identity is modified, transformed, expanded, unified, and re-imagined, which are intertwined, giving rise to group identity. The meanings and connotations of ‘identity’, ‘personality’, ‘other’, ‘gender’, ‘belonging’, ‘groups’, ‘culture’ or ‘past’, among many other notions, as well as the roles associated with them, are changing at a rapid pace. technology, and generate a distortion between reality and illusion.

For his part, José Luis Lopez offers us, through his lens, a critical look at the landscape, that is the landscape and space of its transformation at the dawn of the movement of time and climate. This reflection is expressed around the many series of photographs that collect, each of a different capacity according to the subject captured, and different visions of some prints that are largely our own and thus common in our way of constructing ourselves as canaries. From the sea-changing ceramic color of the series NavyOr the moisture of the sea that surrounds us high tideto the devastation in which it was depicted sailing directionsLópez Monzón travels through the archipelago and its landscapes, drawing our attention to the transformation of the continuous passage of time.

It is necessary to highlight the appreciation to all participants in the 2021 edition of the CajaCanarias Awards, to expressly congratulate the winners of each of them and to express, once again, the gratitude and commitment of the CajaCanarias Foundation to our heritage makers. culture, as well as the environment that encourages, drives and protects it.