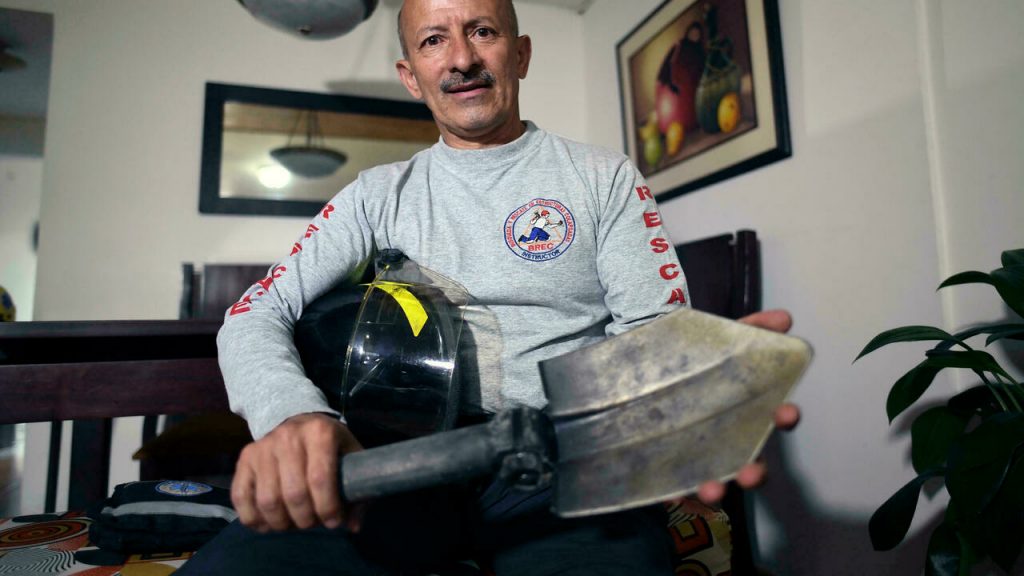 Twenty years have passed, but rescue expert Luis Eduardo Marulanda still breaks his voice as he remembers his days in the pile of rubble at the World Trade Center (WTC) after the September 11, 2001 attacks.

He was interviewed by AFP in the early morning of September 14 in New York, after he emerged from zero and was applauded by hundreds of people after searching for survivors for more than 40 hours nonstop. And then some 20 years later, at his home in Bogota, where he still wonders if he could do more to help.

“I get goosebumps,” says Marulanda, now 57, excited, recalling that night when the number of the disappeared numbered in the thousands. “We knew there were many people trapped there.”

When the jihadists hijacked two planes and crashed into the Twin Towers, Marolanda was in New York by chance, to take a firefighter instructor course and buy ambulances for the Colombian Red Cross.

He came to southern Manhattan to volunteer as a firefighter shortly after 9 a.m. on 9/11, before the towers’ brutal collapse. I won’t get out of there until after 90 days.

Carrying about 45 kg of equipment – a compressed air tank, axe, lengths of hose, nails – he was among the first to attempt to enter the North Tower to help evacuate people as the first fire units arrived.

See also  How to reduce the weight of screenshots on Samsung

He remembers Marulanda, who has extensive experience as a rescue worker in earthquakes, avalanches, and other disasters in Colombia, Ecuador, Peru, Mexico, Haiti, and New Zealand, as well as 9/11.

“Thank God they didn’t let us go up because we were going to perish in the collapse,” he asserts, as many firefighters were able to do so soon after.

He stayed at Ground Zero for three months, first searching for survivors, sleeping for a few hours with other rescue workers in abandoned offices nearby, then collecting evidence of all kinds. He found everything from human remains to the landing gear and the black box of one of the hijacked planes.

“I saw loose limbs, loose trunks (…) I saw many, many charred corpses left so small, shriveled, impossible to identify,” said this expert of the collapsed structures, amid the strong smell of “pure roast meat.” Two decades ago, exhausted and covered in dust and sweat, under the huge floodlights that lit up Ground Zero, shrouded in smoke.

This is one of the things that still troubles him: The impact of the collapse of the towers was so great that no remains – not even traces of DNA – of hundreds of victims were found. Many families were not able to bury their dead.

“I saw a Mexican family they gave her a pair of shoes to bury, I remember their faces, the translator spoke to them and the woman said: Do you want me to take this?”

See also  NASA responds: What does science look like in space? | Video

He recalls, “I had to find fingers, and a bunch of long hair, I’d say belonged to a woman. And from there they got the DNA. The shirts, the arm, the crushed hand….”

As for the Twin Towers, he was shocked by “the massive destruction, so very gigantic, and in a very small space.” The memory of many undocumented immigrants who did not even dare to ask for the remains of their missing relatives for fear of deportation.

He also helped several firefighters caught up in the collapse of the 47-story World Trade Center Building 7, which collapsed seven hours after the Twin Towers.

He recounted 20 years ago: “I ran to help them, washed their eyes, gave them oxygen, and gave them intravenous fluids.”

Today he still wonders “if those who died should die”. He wonders, “Could I have done more? Have I done enough?”

He felt “the pain of a homeland, although it is not my homeland. But one does not need to be an American citizen to feel this pain. And this is still going on,” he said.

It was “marathon days” and when he wasn’t giving any more, he sought help from the psychologists housed in tents on the other side of the Hudson River in New Jersey. There were also chiropractors “who broke your case, but left you as good as new.”

Marolanda lived the 9/11 disaster in her dreams for months.

“My wife told me she jumped a lot in bed, and she told me it bothered her and would wake her up anytime. We had to start looking for professional psychiatric help, and talking a lot about it.”

He did not have time to apply for an extension of his US visa in those three months he worked at Ground Zero. When he wanted to return to Colombia, he appeared before an immigration judge.

“He wanted to deport me, said I was irresponsible, mistreated. He kept me from returning to the United States for seven years.”